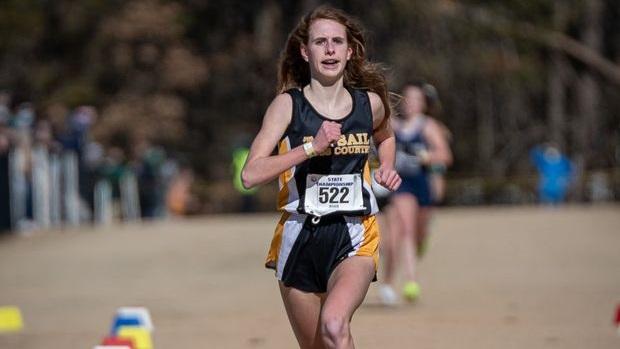 Taking the No. 3 spot on our girl's cross country pre-season countdown is Topsail's Kaitlyn Obremski! This top three was hard to come to a final decision on.

Obremski is the defending NCHSAA 3A East Regional champion, and was 3rd at the 3A state meet in cross country. Her seasonal best of 17:37 came at a Topsail home meet, but her personal best of 17:30 is from the 2019 season. As a freshman in 2019, she won the NCHSAA 3A East Regional and was 5th at the cross country state meet. In 2018 she won the Rising Stars race at Team Cross Southeast Regional at WakeMed!

She had some huge performances on the track this past season. She managed to break the 5:00 barrier in the 1600m, and the 11:00 barrier in the 3200m, which is an outstanding feat. She ran 4:59 to win the NCHSAA 3A East Regional and ended up taking runner-up at the state meet in the event.

She ran her personal best of 10:58 at the 3A state meet to take her second runner-up finish of the day.

Obremski has been on the verge of a state title for a couple years now, but this could be the year she finally breaks out into a superstar. With the move up to 4A, Obremski is going to have a lot of new faces lining up next to her, but it is nothing the junior cannot handle.