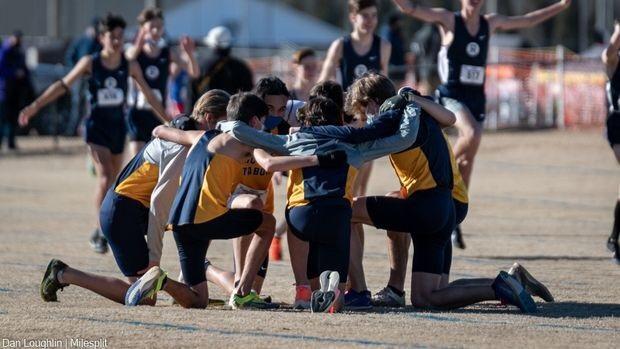 The top spot on our pre-season cross country countdown belongs to the Spartans of Mount Tabor!

The Spartans were 3rd at the 2020 NCHSAA 3A state meet, but they return their entire top seven in 2021! Leading the way for Mount Tabor is senior Will Soule. Soule was runner-up at in 2021 NCHSAA 3A 1600m and ran his personal best in the event, 4:14, at NCRunners Twilight earlier that season. His 1600m was NC No. 5 last season.

He was the top finisher from North Carolina at the New Balance Dash for Doobie where he ran 9:15 over 3200m. His 9:15 ranks him NC No. 26 all time for juniors. Soule was 4th at the NCHSAA 3A cross country state meet.

Jonah Mussomeli had a fantastic freshman season, clocking 16:13 over 5000m. He was 31st at the state meet and was the top freshman.

Senior Davis Potter was 16th at last season's state meet after finishing 16th at their regional. Potter holds personal bests on the track of 4:25, and 9:41.

Junior Connor Riley has not competed since cross country, so his fitness heading into the season will be something to watch.

Mac Barrett and Lucas Plitt join Soule and Potter as the seniors on this front line, and look to push the Spartan pack as clock to Soule and Mussomeli as possible. Their returning No. 6, Jeremy Kern, is only six seconds off their No. 4 spot and after a great track season, he could be a threat to move up on the team. Kern ran 4:39 and 10:01 on the track in the 1600m and 3200m respectively

Mount Tabor was ranked No. 25 on the MileSplit US pre-season countdown.