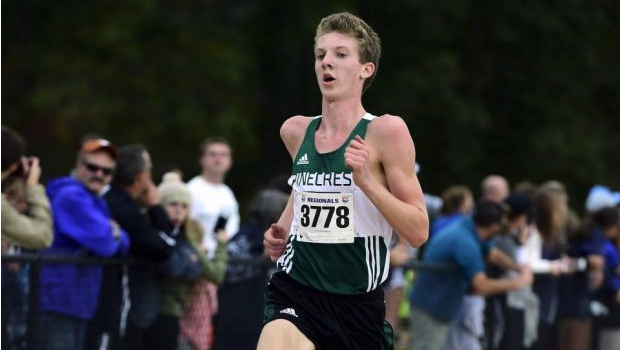 Pinecrest boys are going to be a really young team this fall, but I think this program has a ton of potential for this season despite likely having no seniors in their top 7.  They graduate their top runner from last year in Colin Alexander who was 8th at the 4A State Championship.  They'll be lead by sophomore Andrew Thompson and junior AJ Williams who had really strong seasons on the track.

Thompson will be their top returner after running 16:40 at the State Championship during his freshman season.  On the track, he ran a converted 1600m of 4:29.61 at the NBON while also running 1:58.93 for the 800m.  He was the #4 freshman in NC in the 1600 and the #2 freshman in the 800m.  While I do think Williams is likely a better track runner than and cross country guy, he should be able to get into the low 16s this fall and compete to be Pinecrest's top guy.

Rising Junior AJ Williams should be upfront with Thompson for Pinecrest this fall.  Indoors he ran a 1600m of 4:28 while also running 1:57.85 for the 800m.  He finished 9th at the 4A State Championship in the 800m last spring.  In cross, he ended the year with a 16:58 PR where he finished 67th at the 4A State Championship.  A year prior he only broke 18 minutes once while last year he was a lot more consistent in the 17s.  If Williams can take another step forward in XC it'll be really big for Pinecrest this fall.

Dillon Black will be the teams #3 returner this season after running 17:00 last fall.  Black was very consistent in the low 17s last fall, however he missed the 2018 track season.  Bringing back Black in top form will be important for Pinecrest's success this fall.  As a freshman on the track he ran PRs of 4:48 and 10:21, so certainly has a lot of potential for this season.

An addition that could be huge for Pinecrest this fall is Matthew Bauer who ran his first track season last spring.  The rising junior ran 4:37 and 10:30 on the track.  Though he hasn't run XC prior he should be able to impact the teams top 5 if he runs this fall.  They'll also have Troye Curtin who ran 4:58 for the 1600m last fall.  He should be able to improve on his 18:35 PR from last fall.

A big boost for this program is going to be incoming freshman Adrian Archer who could be the top freshman in the state, and even the top runner on this team.  Archer comes in with PRs of 2:07, 4:37 for the converted 1600m and 9:32 for the 3000m.  He recently placed 4th in the 13-14 1500m at the USATF Junior National meet running 4:19.  This should put Archer in the mix to be in the top 5 this year for sure, and should be in the top 3 at the very least if his success improves.

This is going to be a young team, but it's a team that's going to have a ton of potential for the next two years.  Even though they're 38th in our returning rankings, the addition of both Bauer and Archer to the program is going to significantly jump them up to be 4A Midwest regional contenders.