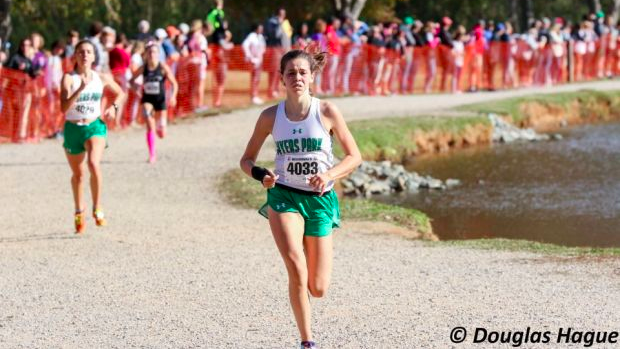 Myers Park is one of my favorite sleeper teams for the 2018 cross country season.  They return as the #15 team in our database, but I think they have the potential to be in the top 5 and place on the podium for 4A Girls this fall.  On the track last year they ranked as the number 4 team in the state over the 1600m when you score the event cross country style.  The team will be led by three seniors in Zoe Dunlap, Joelle Ryan and Tyler Brading with a ton of depth following them.

The teams top returner will be Zoe Dunlap who ran 19:32 last fall.  2017 was Dunlap's first true season on the cross country course as she finished the year in 30th at the NCHSAA State Championships.  Dunlap holds solid PRs on the track with a 2:24 800m from last spring as well as 5:35 for the 1600m.  Dunlap will be a senior this fall and is coming off her best season on the track yet.  After getting a full season of cross country in last fall she'll return with much more experience this season.

Joelle Ryan and Tyler Brading return as the teams 2-3, but could have easily been the teams top girl last year as the top three were separated by only 3 seconds.  Ryan didn't race much in the 2018 outdoor track season, but did run best of 5:28 for the 1600m and returns with a 5000m best of 19:34.  Her 2017 cross country season was big dropping her PR from 20:39 down to 19:34.  Brading returns with a PR of 19:35 and ran 5:46 in her one track race last spring.  Brading has been consistent for Myers Park the last two seasons finishing 34th and 39th at the 4A State Championships and should be a member of the top 5 once again.

They'll bring back Cora Cooke as well who just ran 21:44 last year as a freshman.  On the track Cooke had a ton of success running 2:18 and 5:06 for the full Mile.  Cooke transitioned from a sprinter in middle school to distance at Myers Park and is the likely reason she struggled last fall.  In the Mecklenburg County 2 Mile meet she ran the fastest time of the day of 13:08 by nearly a minute.  This is going to be a big boost for the Mustangs this fall as she will likely be the teams top girl and I believe can be an all-state runner in 4A this fall.

The teams depth is going to be the biggest boost to this squad this year assuming their track success translates to the cross country course.  They'll have junior Brenda Gray who had a best of 21:25 last fall, but ran 5:29 on the track.  She also ran 12:06 for the 3200m and should impact the teams top 5 this fall.  They'll have a strong sophomore class in Sarah Holshouser, Gracie Landrum, Megan Merritt and Mason Harkleroad who ran 5:33, 5:37, 5:38 and 5:46 on the track respectively last fall.  They return 10 sub 5:50 1600m girls also including Clara Richards and Ella Page and are going to be a really deep team.

From the looks of the team in the preseason they'll have Cora Cooke competing as the teams low stick, and likely a very tight gap from 2-7 and maybe even beyond that.  I wanted to rank them higher, but left them at 10 since they have to prove it on the cross country course first.  They'll run their first 5K this weekend on their home course, which is one of the slower courses in NC.  This is a team that historically peaks perfectly at the regional and state meet.  With all of this talent Myers Park is going to be a team to watch heading into the state meet with the potential to be a podium team this fall.