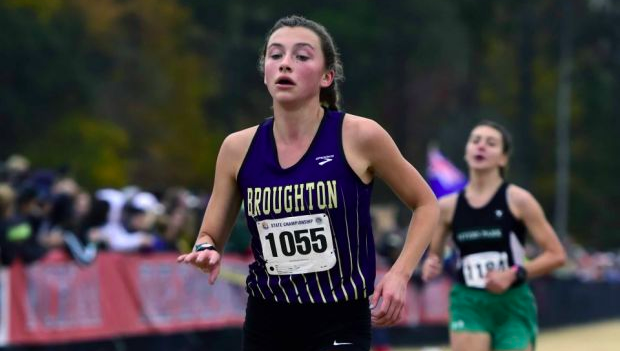 Broughton girls took 5th place last year with a 44-second gap from 1-5, which was the best in the 4A State Championships.  The Capitals return 4 of their top 5 and 5 of their top 7 including three rising seniors and two rising sophomores.  Like last year, this will be a team with a tight 1-5 gap as they'll look to win the NCHSAA 4A East Regional title this fall.

The teams top returner will be Anna Simmons who ran 19:31 last fall as a junior.  Simmons has been inside of the Capitals top 7 the last two seasons after running 19:52 as a sophomore then ending as the teams top girl one year later.  Simmons returns with a 29th place finish at the NCHSAA 4A State Championships, 16 spots better than her 45th place finish as a sophomore.  Simmons holds a 1600m PR of 5:21 and clocked a 5:24 last fall outdoors as well as a 5:25 indoors.

Senior Annabelle Atkinson who only runs cross country for Broughton will be the teams #2 returner from a year ago.  Atkinson plays another spring sport so doesn't compete on the track, but has been a member of the teams top 7 all three years of he high school career.  She ran 20:00 as a freshman, 19:39 as a sophomore and 19:45 last fall as a junior.  He best finish at the state championships came from her sophomore year where she placed 30th overall.

Jordan Daniels had a stellar freshman year at Broughton finishing as the teams #4 girl with a PR of 19:50.  She was 68th at the NCHSAA State Championships and should be one of Broughton's top girls once again this fall.  On the track she ran 5:41 for the 1600m and was the 6th frosh/soph girl at the Baysix Kickoff a week ago.

They'll return EJ Fuller and Allie Brown as well from last years varsity squad.  Fuller, a rising senior, returns with a 20:00 seasons best from her junior year.  Fuller runs indoors, but like Atkinson competes in a spring sport so doesn't run outdoor track.  Brown is a rising sophomore who also doesn't run track for Broughton, but returns with a PR of 20:11.  Emma Lyon will a girl Broughton will look to step up this fall.  She ran 20:35 last fall, but looks to have had an injury early in the season.  She's had two very promising track seasons where she ran 5:21 as a freshman and 5:36 as a sophomore in limited action.