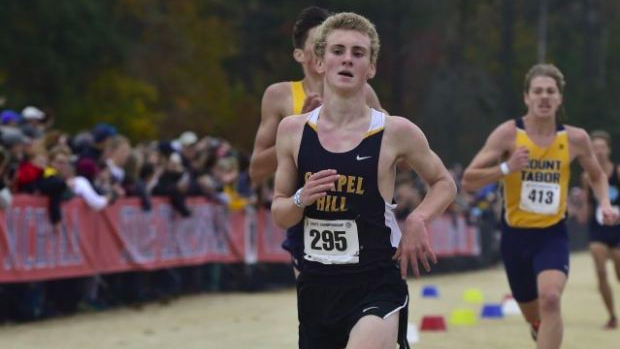 Chapel Hill is a perennially strong program that has always been tremendously deep.  Just a year ago they had three boys under 16 minutes, 11 boys under 17 minutes and 24 boys under 18 minutes.  Last year they took 3rd at the NCHSAA 3A State Championships and take a big hit from their 2018 graduating class losing Ryan Combs, Nat Romaine and Silas Buckner.  Things should be no different with the Tigers' depth this fall, but the team certainly takes a hit with their firepower up front.

Ben Hawley proved he was the future star of this program after finishing last season as the teams top runner at the NCHSAA 3A State Championships.  Hawley clocked a 16:15 last year as a freshman and placed 16th at the state meet running 16:23.  Hawley was one of the states top freshman in cross country last fall kicking off the year with a 16:32 and running well under 17 6 times last fall.  During his freshman track season Hawley ran 4:41 indoors and 9:59 for the 3200m outdoors.  He proved to be a stud last year and could be one of the best to ever come out of Chapel Hill.

James Clabo returns as the number 2 man with a PR of 16:28 last fall.  Clabo was the teams #5 runner last fall, but had an off day at the 3A State Championships taking 107th overall after placing 49th as a sophomore.  Clabo will be this team's senior leader and will compete with Hawley to be their top guy this season.  Clabo qualified as an individual to the NCHSAA 3A Outdoor State Championships where he clocked 10:08.  He also ran 4:38 on the track this spring for the 1600m.

Jacob Meredith-Andrews kicked off last season in strong form, but injury caused him to miss the majority of the season.  He did clock 16:32 in his one race at the Jungle Run.  Adding him back in top form could be key for the Tigers this year.  He ran 4:37 for the converted 1600m during the outdoor season last spring. They'll also return sophomore Zeno Scotti who ran 16:34 last year as a sophomore.  Scotti is strong in cross country than he is on the track, but holds 4:51 and 10:13 PRs on the track.

Owen Rogers looks to be a standout for this team from the track season.  Roger returns with a 16:48 PR and ran 9:58 on the track last year as a sophomore.  At their team camp at App State he finished third as the top runner for the Tigers.  The Tiger could have a big year as he enters the teams top 7 for the first time in his career.  Rising sophomores Emil Arangala, Max Reisinger, Simon Cook and Ethan Mathis are others that could impact the teams top 7 this year after promising starts to their careers.  Mathis seems to be more of a track guy, but ran 2:00.79 last spring as a freshman.