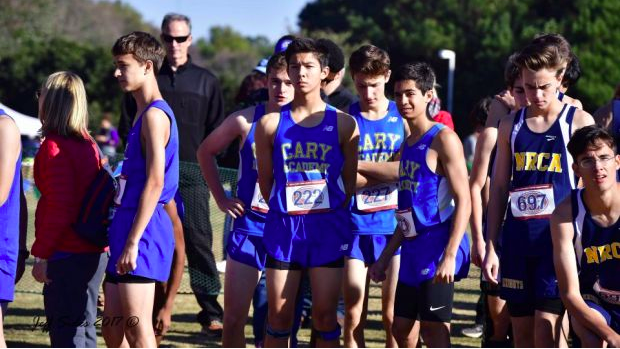 Last year Cary Academy came just ten points short of winning yet another NCISAA 3A title behind Providence Day.  They'll return without three-time NCISAA XC Champ Coleman Mitchell leading the way for them as well.  They'll also lose Chase Coley who was 4th at NCISAAs last fall as well as Dylan Lamphier who was their #3 last season.

It'll be a new look Charger team returning just Abe Weinstein and Luke Johnson from their top 5 last year.  The duo will both be rising seniors who will be at the helm for the Cary Academy team this fall.  Weinstein returns as their top man with a 16:36 PR with Johnson just behind at 16:38.  Johnson only runs XC for Cary Academy, and just ran 5 races for them last fall.  While Weinstein will be the teams top returner in XC he won't be there top returner on the track.  He clocked 4:54 and 10:40 last fall as he seems to prefer the longer distances.

Krishan Guzzo and Grant Scotto both return as varsity runners for Cary Academy and both were on the fringe of breaking 17 a year ago with 17:03 and 17:08 PRs to their name.  Guzzo clocked 16:58 as a freshman, though is coming off his best track season yet where he ran 4:44.  He should certainly be hungry for a breakthrough as he'll want to break a three-year-old PR.  Scotto ran 17:08 at the Greensboro Invitational, which hasn't been known as one of the states faster courses.  Last year was a big XC season for him, and Cary Academy will need the junior to be at his best this season.

Rising sophomore Kenny Eheman showed a lot of promise on the track running 2:04, 4:40 and 10:24.  Eheman didn't run XC for the Chargers last fall, but with that level of success on the track, I'd think they'll be able to get him to come out for XC, unless he plays soccer of another sport.  It'd certainly be a huge addition to the team.

Cary Academy will also look to have rising sophomore's Marvin Koonce and Matthew Crow contribute this fall.  The duo was just outside of the top 7 last year and should contend for a top 7 spot this fall.  Rising junior David Go was the teams 8th man last fall, and will be their #5 returner for the fall with 17:50 credentials in XC.  We didn't see Go on the track last fall, but with a strong sophomore class it certainly will be tough to crack the top 7 this

The team will move up to the new NCISAA 4A classification, but they'll contend with familiar foes in Providence Day and TISAC rivals Durham Academy.  Will they be able to contend for a top 2 finish once again this fall despite losing their top 3 from 2017?