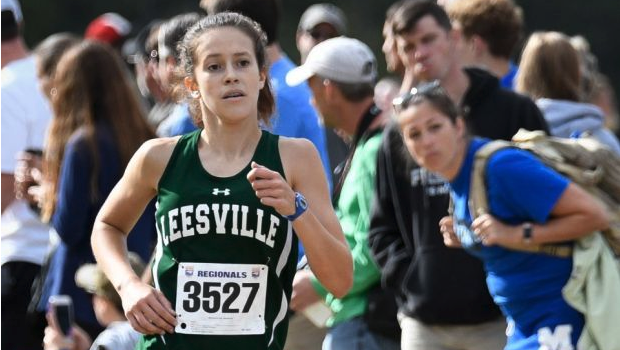 Leesville Road comes in at 14th in our subjective rankings after finishing 9th place last year at the NCHSAA 4A State Championships.  The Pride return three sub-20 girls from last fall, and look to have a gap back to their 4 and 5, but certainly seemed to find answers there during the track season. Leesville will graduate last years #1 girl Audrey Hemming and #5 Hannah Willard from last years varsity squad.

Hannah Comeskey returns with a PR of 19:47 after having a breakout junior year.  She emerged on the varsity squad last season and pushed her way up to the #2 girl on the team after having PRs of 21:30 and 23:06 over her sophomore and freshman year.  Comeskey's breakout didn't stop after the cross country season.  She ran 5:16 for the 1600m on the track and 2:26.5 for the 800m.  She individually qualified for the NCHSAA 4A Outdoor State Championships in the 1600m as well placing 11th overall.

The teams #2 girl will be Ashley Tysiac who ran 19:51 in her first cross country season.  The rising senior was a big addition to the team last fall after taking 75th at the 4A XC State Championships last fall.  She thrived on the track as well last fall running 5:18 and 2:23.05 qualifying for the 4A Outdoor state championships in both.  Tysiac placed 10th in the 4A 1600m and doubled back to place 9th in the 800m.  Her track success proves that she's capable of doing a lot more on the cross country course this fall.

Rising junior Dalia Hasan had a big year last fall having her best race of the year at the State Championships placing 50th overall running 19:51 in her first time ever breaking 20 minutes.  On the track Hasan placed 8th in the 3200m at the 4A State Championships clocking 11:52.  Hasan seems to be capable of being the teams top girl this fall if her 3200m success continues over the 5000m.

Rising senior Abby Hemming will be the teams #5 returner with a PR of 21:03, but had a big track season last spring.  Hemming clocked 5:49 for the 1600m taking 10th in the 4A East Region.  Last fall was Hemming's first year cracking the top 7, and she should impact the top 5 this fall.  The team will also return Delphine Lopez from last years top 7 who ran 21:02.  Rising sophomore Caroline Comeskey had a strong season on the track running 5:56 for the 1600m as she'll fight for a varsity spot this fall.

This team looks to be strong through three girls but having a 4th and 5th step up will be vital for this teams success this fall.  If their top three can drop down to the low 19s and can round out the top 5 with two low 20-minute girls this will be a strong team this fall.  Last year Leesville showed a steady improvement last fall, so they're going to be a team to watch as championship season comes around.