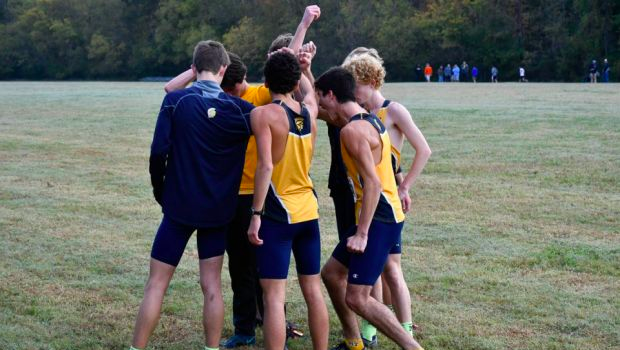 The 2017 NCHSAA 3A XC State Champions lose individual state champ Cameron Ponder, Charles Pace and Michael Moerk.  Those Spartans who have been a big part of the teams top 7 over their high school careers are going to be tough to replace.  The team returns ranked 20th in our returning rankings and they fell to 14th on our subjective rankings.  But knowing the success of this program it's tough to picture them outside of the top 10 at the end of the season despite the heavy graduation hit.

The teams top returner will be senior James Vlasis who ran 16:31 last year as a junior finishing as the teams #4 runner.  Last year was Vlasis' first year running since his middle school days where he was a 5:19 1600m runner.  Vlasis had immediate success last fall for the Spartans in cross country and was able to get even stronger on the track.  He ran 2:00.4 and 4:29 for the 800m and 1600m last spring on the track.  Vlasis finished 31st at the state championship last fall and should be a bigger force this fall after getting a full year of running under his belt.

William Scurry has been in the teams top 5 the last two years and ran 16:33 last fall placing 25th at the state championships.  Scurry holds a PR of 16:31 from his sophomore year and will be looking to drop time off that PR this fall as a senior.  Scurry holds tracks PRs of 4:41 and 10:02 and is going to need to step up for the Spartans this fall.

The team will return Max Thomas and Hayden Coty from their top 7 last year.  The senior duo ended the year as the teams #6 and #7 runners and return with PRs of 17:09 and 17:11.  Thomas missed the outdoor season last fall, but ran 4:39 for the 1600m and 10:08 for the 3200m indoors and should make a bigger impact on the varsity team this fall.  Coty returns with a PR of 4:41 from last track season in the 1600m.  These seniors are going to be a big part of the teams success this fall.

The Spartans will also add junior Jacob Gallant to the program this fall.  Gallant moved from Walkertown during the 2017 XC season and per WSFCS rules had to sit out for the 2017-2018 school year.  He did race unattached during his sophomore year running 2:05, 4:30 for the converted 1600m and 9:43 for the 3200m.  He ran 17:01 for XC as a freshman at Walkertown and is going to make a big impact for this team this fall potentially being their #1 guy.

They also will add in freshman Finley Simmons who ran 4:55 as a 7th grader and 4:51 as an 8th grader and was dominant at the middle school level.  Simmons should impact the top 7 as a freshman and could be the best freshman runner in NC this fall.  The team isn't going to have the star power they've had with Ponder, Moerk and Pace the last two years, but return 13 sub 5 1600m runners (including Gallant and Simmons) this fall.  There should be a lot of competition to crack the top 7 this fall for Mt. Tabor and despite the heavy graduation hit, this program isn't disappearing from the top of the state ranks anytime soon.