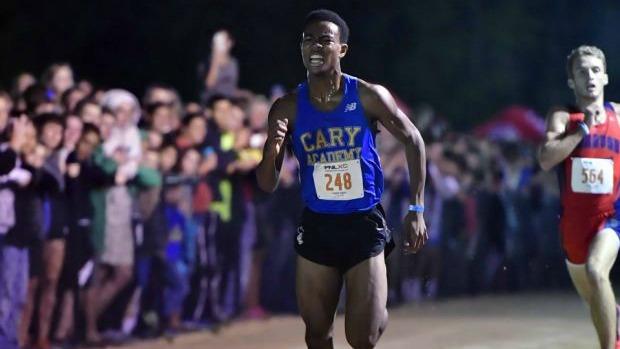 We'll get to see Carmen Alder (Pinecrest) looking for some redemption after a tough day at adidas two weekes ago.  The freshman holds a PR of 18:33 from a month ago at the Providence Invitational and looks to be one of the top girls in NC this season.  This will be a real test for Alder as this field is no cake walk.  She'll go up against defending champion in Katherine Dokholyan (Chapel Hill) who has always posted strong performances at Hagan Stone.  Similar to Alder Dokholyan likely wasn't happy with her performance at adidas and will be looking to bounce back on a course she's had a lot of success at.

Sophia Jantomaso (Patriot Pacers) is someone who could surprise in this field.  Last year she ran 18:47 on this course at the Hagan Stone Invitational and I think she's capable of taking the win this weekend though she hasn't really raced much this fall so we don't know what form she's in.  Alexis McDonnell (Hough) has had a massive breakout this XC season and has clocked an 18:43.  She contended in a lot of big fields this season and if she can hold the pace with the leaders she could be in for another PR.  Also Lila Peters (Sanderson) is improving nearly every race as the year goes on.  She holds a PR of 18:46 and I think she'll end the season much faster than that, we'll see if the big step forward is this weekend.

Chapel Hill are going to be the team to beat as their top 7 girls are projected to be in before most everyone's 3rd runner.  We saw them run well at Jungle Run and at Adidas this season.  Though they were second place in a loaded Adidas field I still project the Tigers to be much better than that performance.  It's going to be the Virginia teams of Hidden Valley and the Patriot Pacers that pose as the biggest threats to Chapel Hill tomorrow if these teams are as good as they have been in previous years.  From NC it'll be Panther Creek, Northern Guilford, Pinecrest, Leesville Road and Sanderson that all could take home a team trophy tomorrow.

John Tatter (R.J. Reynolds) comes in as the top seed after running 15:00 two weeks ago.  Though last year Tatter just tempo'd/paced teammates in this race and I'm expecting him to do the same here as he gears up for Wendy's next weekend.  Though there is plenty of talented guys up front which could give Tatter the urge to race.

David Melville (Northern Guilford) and Coleman Mitchell (Cary Academy) will likely battle it out for the win.  Melville hasn't been with his team at every race this season due to college visits, but is entered to compete this weekend.  Melville ran 15:13 at adidas and will be the hometown favorite heading into this weekend.  Mitchell is someone you can never count out in any race he's in and has proven that he is a force in cross country.  I'd expect these two to battle it out to the finish line tomorrow.  I think both of these boys could challenge Ben Huffman's meet record of 15:13 tomorrow.

Chase Coley (Cary Academy) and Joey Bream (Panther Creek) are two that could contend up front, though there seems to be a big gap beyond the top three boys.  Coley has been strong this year running 15:56 and I expect him to be better than that at seasons end.  Bream has been the breakout star for PC this fall and will look to continue as a much needed low stick for them this weekend. Colin Alexander (Pinecrest), Ryan Combs (Chapel Hill), Nat Romaine (Chapel Hill) and Anton Idhammar (Cary) are athletes I expect to mix it up for a top 5 spot tomorrow.

The team battle is going to be awesome tomorrow.  Chapel Hill is projected to win by 14 over Panther Creek in our virtual meet, but they lost to both PC and Cary at adidas. The outcome between these three squads are likely different in each race they're in this season.  Both Chapel Hill and Cary have tight packs at 27 & 24 seconds 1-5 split this season.  Also expect Cary Academy to mix it up with these teams up front as any of the three will be able to win the team title tomorrow afternoon.