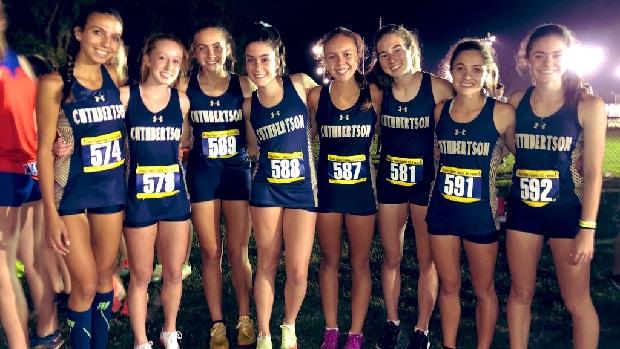 The No. 1 team on our cross country pre-season countdown are the Cavaliers of Cuthbertson High School!

The Cavaliers are returning an insane amount of star power to defend their NCHSAA 4A cross country state title. In fact, they return their top six runners from the championship team.

This squad runs deep. They had their entire top five make the pre-season individual countdown: 3-4-5-9-10.

Senior leaders Alyssa Preisano and Lily Nasta are all-in on their final cross country campaign, and they want it to be an all-timer.

Preisano, a Wake Forest commit, is hunting her first individual cross country state title. As a junior she was 4th and as a sophomore she was runner-up at the state meet. She holds a cross county personal best of 17:42.34, which was NC No. 5 on the season and No. 2 amongst returners. She is a multi-time state champion on the track, but now it is time for her to carry that over to the course this fall.

Along with the seniors, there is a trio of now-juniors who are ready to take the country by storm.

The X-factor to this team's success on the national stage is going to come from junior Stella Kermes. The junior emerged, like Bell and J. Preisano, to the national spotlight this spring as a sophomore and looks to only build on it. She was 9th at the cross country state meet last fall, but went on to set a personal best at Garmin RunningLane Cross Country Championship (17:49.25). She won the indoor 1,000m state title and placed 5th in the indoor 1,600m. Outdoors, she ran a class US No. 15 1-mile time of 4:54.68. She placed 3rd in the 1,600m and 5th in the 3,200m at the outdoor state meet.

This Cuthbertson team has it all, but they still have to put in the work in order to repeat as state champion and go on to cross country nationals. There are plenty of hungry teams ready to line-up next to the Cavaliers this season, but the doubters and the competition only make them stronger. Don't poke the bear.

To put some context on how good these Cavaliers can be, last fall Cuthbertson scored 50 points to win the state title. The lowest score in NCHSAA 4A girls cross country state history is 28 points, scored in 1984 by Chapel Hill. The girls all-classification state meet points record is 21, set in 2007 by then-NCHSAA 2A Cardinal Gibbons. The overall record is 20 points, scored by the boys of NCHSAA 1A's Surry Central back in 2003.

Who finishes as NC No. 1 girls team this season?