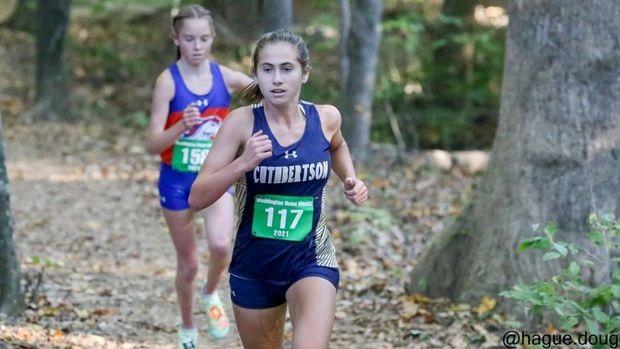 Cuthbertson rising junior Charlotte Bell comes in at No. 5 on the girls' cross country pre-season countdown!

Bell was nothing short of a superstar on the track this past spring.

She won the NCHSAA 4A 800m state championship in 2:12.23. She won the All American Track Classic 800m as well to top off an undefeated season in the half-mile race. She ran her personal best of 2:08.92 at the NCRunners Elite Tune Up in early June. That mark is NC No. 6 all-time, sophomore class NC No. 2 all-time, and sophomore class US No. 69 all-time.

She only ran one 3,200m during either track season, but it was an impressive one. She ran 10:35.75 to take 5th at the adidas Raleigh Relays in March. That time finished NC No. 3 on the season and sophomore class No. 5 all-time.

Bell was also a crucial part of the Cuthbertson state record 4x800m and 4xMile teams during indoor season.

Last fall she was 16th at the NCHSAA 4A State Championship and helped her Cuthbertson squad run away with the state title. She went from a personal best of 19:22 as a freshman to 18:32 as a sophomore. Now, as a junior, I expect her to take another minute off her personal best, if not more.

Bell has established herself as a dominant 800m and 1,600m runner, but now is her time to prove to the state and country that she is one of the most versatile runners in her class.

Where does Bell finish at NCHSAA 4A State Meet?