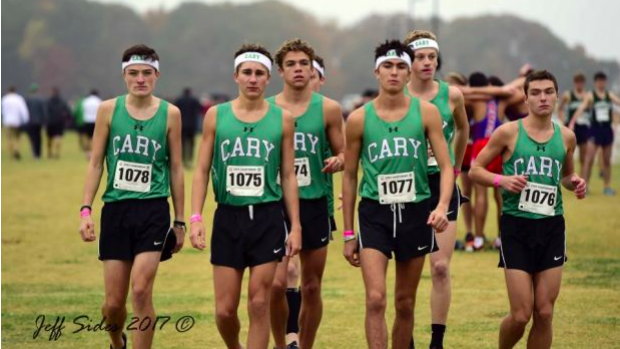 The NCHSAA 4A Boys Championship will be an interesting one.  Last years event had John Tatter (R.J. Reynolds) and Green Hope looking unbeatable for the team and individual titles.  This year there are certainly some favorites, but both the individual and team title will be close between many teams.

Nick Scudder (Millbrook) enters with the fastest time of the season in North Carolina of 15:20.  Four other boys are within 5 seconds of that after a blazing fast 4A Mideast Region last week in Joey Bream (Panther Creek), Carson Williams (Cardinal Gibbons), Anton Idhammar (Cary) and Ian Harrison (Panther Creek).  The regional ended with Bream reeling in Williams as both boys dove across the line.  If we can see anything close to a finish as thrilling as that one it'll go down as the best battle in NCHSAA history.

Scudder won the 4A East Region holding off a late charge from John Malach (Broughton) in 15:58 to Malach's 15:59.  With the regional meets being this close you can expect a show from these six athletes this weekend.

Scudder typically isn't afraid to push the pace and I'd expect him to do so this weekend.  These athletes are very familiar with each other and their racing tactics as all resign from Wake County.

Williams has emerged late in the season.  Last year he was 46th place at the Regional Meet and did not make the state meet.  This year he's PRed in all 5 of his races during a breakout junior year.  Harrison had also emerged in his junior season improving from a 54th place finish last year to a state title contender one year later.  His teammate Bream looked to be the teams lone frontrunner, but he's been with him or ahead of him throughout the season.  Idhammar proved to be a star on the track last spring clocking 1:53 and 4:17.  Last weeks breakthrough was certainly long awaited as he comes into peak form at the right time.

Malach holds a PR from McAlpine earlier in the season of 15:37.  I would expect his time to be right up there with the top 5 heading into the meet if he was in the Mideast region.  There are three juniors amongst the pre-race favorites.  To be the top returner heading into the 2019 season it could very well take a state title on Saturday.

The field will have 16 athletes with sub-16 credentials on the season, most fighting for an All-State performance.  Lowell Hensgen (Cardinal Gibbons), Thomas Vo (Green Hope), Brian Picone (Cary), Tim Haughton (Apex Friendship) and Jackson Martin (Cary) headline that group.  I'd think on a good day each of these boys could be fighting in the top group.  The Midwest Regional Champion Jack Holbrook (R.J. Reynolds) and West Regional Champion Pace Clark (Providence) will look to carry last weeks momentum forward to an All-State performance.

This team battle is going to be interesting.  It looks to be a four team battle from the four Mideast advancers that had just 12 points separating them a week ago.

Cary returned this season as the favorite as long-time Coach Jerry Dotson looked to secure his first boys NCHSAA Cross Country team title after a 2nd place finish last year.  Cary returned their entire top 7 and have averaged 15:47 on the year.  They're led by Anton Idhammar, Brian Picone and Jackson Martin up front.  Each of these boys rank in the top 10 in our virtual meet.  Their key will be a strong day from 5th man Ted Sielatycki who has a seasons best of 16:17.  He's fresh off a big PR at the regional meet as he'll play a key role in their performance tomorrow.

Cardinal Gibbons boys will have the same story as Cary.  Last week they placed 4 boys in the top 12, however finished 4th at the regional meet.  They were the first team with four boys through the line last weekend and will need a strong day up front from Carson Williams and Lowell Hensgen.  Last year Gibbons was the odd man out of the 4A Mideast region missing the state meet.  Just one year later they're back and gunning for the 4A Team title.  They'll need a big day from seniors Mitchell Kisaberth or Rollie Tillman to match the firepower up front of their competition.

Green Hope is one year removed from winning the team title and graduating their top 6 boys that qualified for Nike Cross Nationals.  They're now led by junior Thomas Vo and senior Reed Blackman who have run 15:39 and 15:48 this season.  Justin Polonio has been the teams saving grace this year.  His breakthrough has been incredible after running 18:12 last fall down to a 15:59 PR at the regional level last weekend.  The team is going to be in the hunt to defend their team title in truly impressive fashion if they can pull it off.  The Falcons come in with strong depth through their 7th man and have posted a 43 second 1-5 split on the season.

Panther Creek has been headlined by their studs in Joey Bream and Ian Harrison this season.  What's gone more under the radar is their 3-5 guys improvement throughout the course of the season.  Casper Serrano, Justin Hayes and John Monroe will need to hang tough tomorrow as Panther Creek searches for their first ever cross country team title.  They have the potential to go 1-2 up front, but will need yet another strong day from their 3-5.

You can't count out Broughton from coming through at the state meet as they have in years past.  They're fresh off a 4A East Regional win over Leesville Road.  The Capitals will need their 3-5 to step up and they could be a top 3 team this weekend.  Leesville Road could very well be the first team with 5 boys through the line on Saturday.  Amongst the top teams they have the tightest 1-5 gap of just 32 seconds.  In years past they've shown the ability to come up big at the state meet and could be a surprise team when the team scores come out.

This is going to be as close as it can get.  There is little to no room for error amongst the top teams and it's going to come down to whoever wants it more.