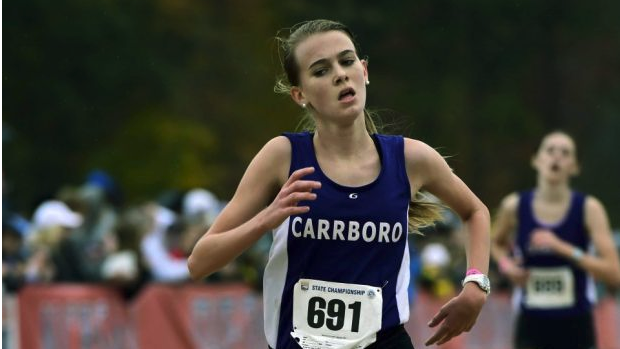 Graduation hit the perennial 2A powerhouse Carrboro hard in 2015 and 2016.  But after a year to rebuild the program is back and will be the preseason favorites to reclaim their NCHSAA 2A Team Title.  They'll return their entire top 7 from a year ago and will have a ton of strong sophomores and juniors to contend for the 2A team title for the next two seasons.  Overall this is a team that's strength is in its depth.  They'll likely have a very tight gap from 1-7 this fall.

Last year they had two girls under 20 minutes in rising junior Cora Van Raay and rising freshman Madeline Ramsden.  Van Raay was the teams top girl last fall with a 19:55 season best.  She took a big jump last fall improving from a 21:20 girl down to 19:55 and placing 15th at the 2A State Championship compared to 40th a year prior.  She individually qualified to the NCHSAA 2A Outdoor State Championship in the 1600m and 800m where she placed 6th and 9th respectively.  She ran 2:26 and 5:27 on the track last fall and should return as one of the teams top girls this fall.

Carrboro will likely have a 1-2 punch up front, but should have a strong pack of girls from 3 back to their 7th girl.  Selia Lounes, Carina Taylor, and Louise Lounes return with very similar PRs of 20:27, 20:29 and 20:36 respectively in XC.  The teams #6 returner, Lia Miller, will likely be in the mix too after a strong track season running 5:45 for the 1600m.  Miller will return with a PR of 20:54.  I'd imagine Carrboro will have these four girls try to stick together early in the race and focus on running as a team.  I don't think it's out of the question for them to have 6 under 20 minutes this fall.  They had all six of these girls under 5:50 for the 1600m on the track.