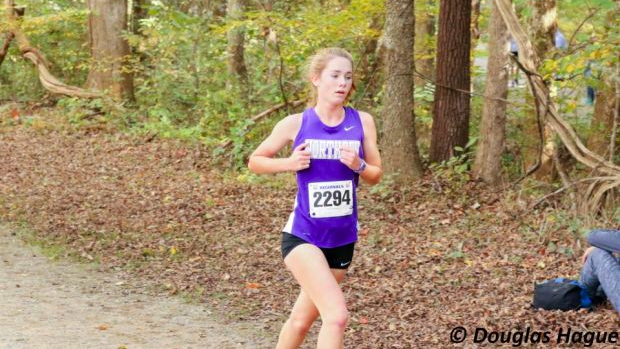 Northern Guilford girls ended the 2017 season as the states #23 ranked team according to our database.  They return their entire top 4 only losing their #5 Olivia Bene.  The team was 7th overall at the NCHSAA 3A State Championships lead by rising junior Emma Fredericks 13th place finish.

Fredericks was wildly consistent last year in cross country.  In the big races, she had a PR of 19:01 ranging from 19:17 from Aug. 29th through the state meet on Nov. 4th.  Fredericks returns with outdoor seasons best of 5:25 and 11:49 as well as 2:24 for the 800m.  Fredericks knows she'll be the low stick for this team as she'll contend to be an All-State runner and a sub-19 girl this fall.

Jessica Hardiman will be the teams #2 returner coming off her junior year where she ran 19:49.  Last year was a big breakout season for her as she dropped over 70 seconds off her PR returning with a 21:06 PR heading into her junior year.  Hardiman's best performance on the track game from a 12:25 performance at the Dogwood TC.

Katie Howell could be a big breakout candidate for Northern Guilford this fall.  As a freshman in XC she was the teams #3 runner with a PR of 19:54.  On the track, she threw down PRs of 2:25, 5:29 and 11:54 which seem a little better than he 5K PR.  Howell started off the XC season strong as was consistent throughout the year breaking 20 minutes twice in the season.  She was the teams #2 runner at the state meet placing 43rd overall.  If she can take a step forward on the cross country course it'll be big for the Knights this fall.

The younger Hardiman, Emma will enter her sophomore season after cracking the top 5 as a freshman with a PR of 20:40.  Hardiman continued to break out throughout the 2017 XC season kicking off the year running over 23 minutes three times to ending with a 20:40 mark placing 74th at the state meet.  Indoors she was able to qualify for the 3200 running a PR of 11:58, also clocking 5:50 for the 1600m.  She only ran on the track three times outdoors but should be able to take another step forward if she returns healthy this fall.

Hope Rackers will return to the varsity team after her first XC season in 2017, but should impact the top 5 this fall.  Rackers returns with a PR of 21:32, but on the track she proved she was in better form than that.  She ran PRs of 5:40 and 12:04 outdoors and should be a big boost for the team this fall.  Also, we've seen mid-distance runners help out XC programs in the past.  There's no indication that rising sophomore Alyssa Hernandez will run XC, but could be in the top 5 if so.  On the track she ran 56.21 and 2:15.99 as she placed 2nd in the 400m at the 3A State Meet.  Maybe it takes a few years, but it wouldn't surprise me to see Hernandez in the teams top 7 this year.