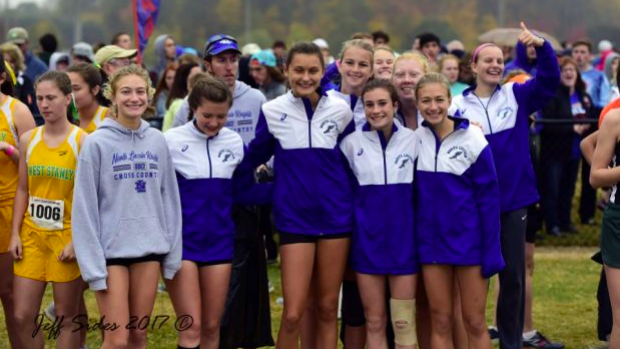 North Lincoln were runner-ups last year, and return all but their top girl Chandler Mccaslin.  Last year they got a big boost from a lot of young runners, and now those athletes will be the leaders of this North Lincoln team that won't hold any seniors.

They'll be lead by two stud frontrunners in rising sophomore Angie Allen and rising junior Alyssa Galvin.  Allen was a huge boost for North Lincoln last year clocking 19:15 where she placed 6th at the NCHSAA 2A State Championships.  On the track she ran even better clocking 5:15.97 for the 1600m placing 3rd outdoors and 4th indoors.  Allen is going to be one of the preseason favorites for the NCHSAA 2A Individual crown this fall.  She'll likely be able to replace Mccaslin as the top girl on this team.

Alyssa Galvin has shown a lot of improvement in her first two years at North Lincoln.  She returns with a 19:11 PR where she took 5th at the NCHSAA 2A State Championships.  On the track she clocked 4:27 for the converted 1600m and finished 4th indoors and outdoors in the 2A 3200m run where she holds a PR of 11:42.  Along with Allen, Galvin will contend for the 2A title individually this fall.  Having both of these girls up front is going to be big for North Lincoln in the 2A ranks.

Shelby Fink holds a 5K PR of 20:58, but looks to have made a big jump forward on the track where she holds a converted 1600m PR of 5:29.  The rising junior also ran 11:37 for the 3200m and took 2nd in the event behind Allen at the 2A West regional.  Fink dropped her PR down from 22:11 during her sophomore year.  With her track times improving substantially it seems like North Lincoln will have a strong 1-2-3 if that track success translates to cross country success.

Shay Rooney and Anne Davin will be North Lincoln's 4/5 this season returning with PRs of 20:39 and 21:30.  Rooney was 33rd at the 2A State Championships last fall while Davin was 95th.  Both girls have shown to be strong in cross country than they are on the track.  But their success individually will likely be imperative to the team's success this season.  They're a small school and won't have the depth that most programs will.  But North Lincoln is a perennially strong program on both the guys and girls side in cross country.  If they develop some depth over the summer or bring in some strong freshman this could be your 2A team champions in November.
#23 Charlotte Latin
#24 Watauga
#25 South View