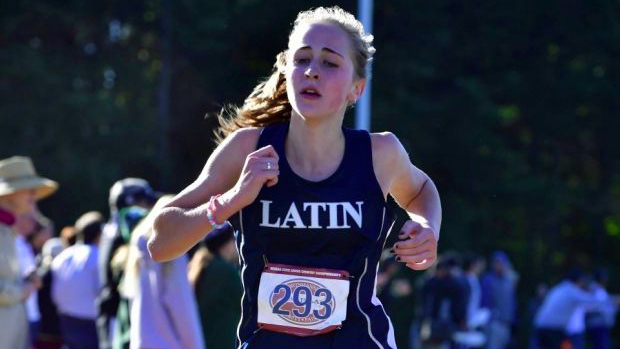 Last season Charlotte Latin took 4th at the NCISAA 3A State Championships scoring 145 points.  This season they return their entire top 7 and are coming off a strong track season.  This team showed that they had strength through their top 5 with 5 girls under 21 minutes, and held a 24 second 1-5 split at the NCISAA State Championships.
Rising senior Ellie Beuley was their top girl last fall returning with a PR of 20:02.  She was 22nd at the 3A State Championship in XC, then 8th on the track in the 1600m.  On the track, she set new PRs of 5:30 and 2:28.  Beuley has gradually improved each of her last three XC seasons going from 21:03 to 20:46 down to 20:02.  She's continued to improve on the track, so I'd expect her to drop her PR down to around 19:30 this season if everything goes as planned.
Marion Donald was the teams top girl at a handful of meets returning with a PR of 20:03.  Donald's PR comes from her freshman year where she clocked 19:48 at the State Meet.  On the track, Donald only ran a handful of meets that don't really reflect what she is capable of.  If they can get her back at full strength it'll be big for a team looking to be top 2 in the NCISAA this fall.
Mary Catherine Pope and Maria Llerenas Soto were the teams #3 and #4 last fall with seasons best of 20:34 and 20:56. Pope holds an overall PR of 20:16 from 2016 and was very consistent in the 20s in big races for Latin last fall.  Llerenas Soto will be a rising sophomore and could have a lot of potential to break out this fall.  She ran last fall and nearly set a new PR every meet starting at 23:20 at FNL and cut over 2 minutes off that time by years end.  She didn't run track for Latin in the spring, but if she comes into this season with more confidence and is in better shape she could breakout for them this fall.
Cassie Figueroa and Madison Sellers will be two girls that drastically can improve this team this season.  Figueroa was the teams #5 last season, but had a big year on the track.  She holds an XC PR of 20:56, but ran 5:43 and 12:38 on the track.  If this track success translated onto the XC course she'll likely be in the top 3 for this team.  Sellers was not in the top 10 for Latin last fall with a PR of 22:00.  She'll be a senior this fall, and had a strong track season where she ran 5:43 in the 1600m.  Sellers should be able to break into the top 5 this fall if she can figure it out over 5000m.
Beyond the six above this is going to be a very deep team.  They'll have Olivia Lowe, Lily Farr, Anna Snyder, Tiana Sullivan and Charley Denny who all were under 22 last fall.  They'll also (likely) bring up Anya Nesmelova from the middle school program who was 3rd at the GCMSAA Conference Championships.  They have at least 12 girls who can impact the top 5 this fall, and this team competition is going to push their individual success to the next level.  With Covenant Day, Cary Academy and Providence Day in the NCISAA 4A this fall it's going to be very competitive in the race for a team title.  Don't be surprised if Latin ends up on top at the end of the season!
#24 Watauga
#25 South View
Tweets by NCRunners