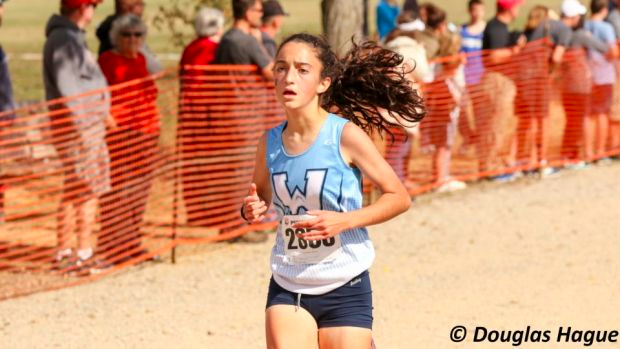 Sophia Ritter
Rebecca Anderson
Caroline Edwards
Watauga will return a strong team that lose none of their top 5 from a year ago.  Rising Junior Sophia Ritter has developed into a star for the Pioneers after taking 4th indoors and 3rd outdoors in the 3A 3200m clocking a PR of 11:08.96.  XC should be the breakout season for Ritter.  She returns with a PR of 19:10 from Foot Locker South last fall, and placed 4th in 3A West and 15th in 3A overall as a sophomore.  As a sophomore Ritter dropped over three minutes on her XC PR.  I think with her recent track success that she's still got a lot of time to drop in the 5K this fall as she looks to lead this Watauga team.
Watauga's returning #2 girl will be rising junior Rebecca Anderson.  Anderson had a similar breakout sophomore year as Ritter dropping her PR from 21:43 down to 19:49 at the NCHSAA 3A State Championship where she took 37th.  Anderson has a strong indoor season where she ran 5:38 and 11:54 in the 1600m and 3200m, but she didn't race during the outdoor season.  That could be due to injury or competing in a different spring sport, but it's hard to know what shape she'll return in.
Watauga's #3 girl Caroline Edwards returns with a PR of 20:20 from her first ever cross country season.  On the track Edwards focused on the 400m & 800m where she holds a PR of 1:08.29 and 2:32.  It'll likely take her til the end of the season to fully transition back to 5K form this fall.  Emma Tzotschew will also contend for a top 5 spot this fall after running 20:41 as a junior.  On the track she brings back a PR of 2:32 in the 800m and 5:50 from the indoor 1600m.  It seems like as a sophomore Tzotschew focused on the 3200m and transitioned to the 800m as a junior.

Riley Fowler could be a girl that steps up for the Pioneers after clocking 5:53 on the track during her sophomore season.  Fowler only ran 23:54 last XC season and was not on the varsity squad, but with her success on the track she should certainly be able to impact the top 7 this season.  Last year was her first season ever running for the school, so she could be one to have a breakout campaign.

Ritter should certainly be the low stick the Pioneers need this fall, but they'll need some other girls to step up and improve across the board.  After narrowly placing second in the 3A West last year to T.C. Roberson, this squad will return as contenders for the regional team title once again.  If they can bring back Anderson in top form and have some girls step up and impact the top five this will be a really strong squad.