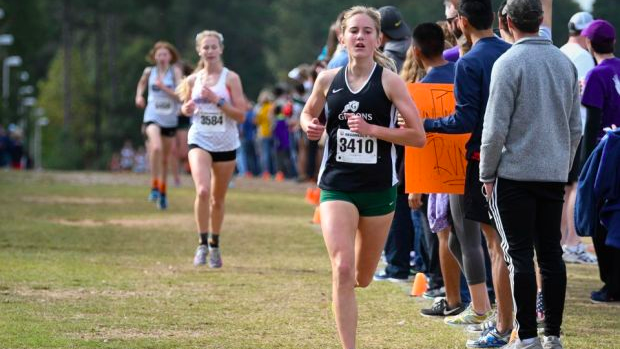 There has been one girl in 4A this season that's been a favorite from the get go, and that's Natalie Tyner (Laney).  Tyner was 2nd in the 3200 on the track after a breakout sophomore season, and has been the most impressive girl in the 4A classification this fall.  She holds a PR of 17:37 from Great American, and has broke 18 minutes 6 times this season.  She's the only girl in 4A to break 18 this fall.  She's definitely a big favorite, but I don't think it'll be a cakewalk for Tyner tomorrow.

Her biggest competition will be freshman Carmen Alder (Pinecrest), who has run 18:04 on the state meet course this season.  The eighth fastest time on the updated state meet course.  Alder and Tyner have raced once this year.  The race resulted in Alder going out hard in her first major XC race, the adidas XC Challenge, and fading while Tyner put together a hard second half of the race to run 17:47. Alder has stated that she wants to win the state title this season, and I expect her to battle it out with Tyner tomorrow.

Calli Parlier (Apex) has quietly emerged through the regional meet running 18:07 to win by 21 seconds.  Parlier set a 22 second seasons best, and I think we'd be foolish to not think she has a realistic shot of winning tomorrow.  We saw Parlier have a big regional race last year, taking 5th, then finishing 8th at the state meet.  Those performances were well ahead of where she was during the regular season.  Once again Parlier is in peak fitness coming out of the regional meet.  This senior is going to go for it tomorrow, and it wouldn't be a surprise to see her upset Tyner tomorrow.

The wildcard is going to be Sloan Walter (Cardinal Gibbons).  Walter was 4th last year, and holds a PR of 18:23, but we didn't see her finish the conference meet, and she did not race at the regional meet.  Despite only running a few races Walter has shown she's fit with her 18:23 at Great American.  If she's healthy she should be in the mix up front tomorrow.

Shannon Sefton (Panther Creek), Lila Peters (Sanderson), Marissa Bishop (Cardinal Gibbons) and Alexis McDonnell (Hough) are likely to battle for a top 5 finish tomorrow.  Sefton and Peters have run 18:21 and 18:22 respectively this season, but both were beaten by Bishop at the regional meet.  Bishop is a veteran from these state championships.  She's been 5th (3A), 3rd and 9th in three attempts at the state championships always running well when it matters.  Alexis McDonnell won at the West regional last weekend in dominating fashion, being 37 seconds ahead of second place.  She ran the race all by herself, and I think could be a big surprise tomorrow.

Others to keep an eye on are Kelsey Vogel (Green Hope), Bailey Reutinger (West Forsyth), Sophie Faircloth (Reagan), Emma Kincaid (Grimsley), and Paxton Chitty (Ashley).  They're just a few of the contenders to walk alway with all-state finishes.  Another wildcard is Katherine Priu (Cardinal Gibbons).  She was the breakout star from the 2016 XC season, but has battled injury and only run 19:27 in her one real race from this season.  She held out of the conference meet, but don't be surprised if Priu is geared up and ready to go tomorrow.

Cardinal Gibbons were certainly the most impressive from the regional weekend dominating the 4A Mideast without Walter, Priu or Caroline Todd.  Their depth has been show as if all were healthy they could have 8 girls under 19 this season.  Though nothings locked and loaded for the Crusaders tomorrow.  They're hard to beat if they bring back a healthy Walter, but I think the door is still open for Green Hope and West Forsyth to pull an upset.  Cardinal Gibbons has not lost a state title since 2009.  They've won the last two 4A titles, and 5 straight 3A team titles from 2010-2014.

Green Hope has had a low key season so far, but proved they were still a podium threat and title contender last weekend taking 2nd to Gibbons, the #2 team result in the state.  They're lead by Kelsey Vogel who posted an impressive 18:38 last weekend.  Green Hope will have to improve at 4-5 tomorrow to have a shot.  Tess and Zoey Davila have been big for the Falcons this year after moving from Illinois and have been running as their 2-3 this fall.

I think West Forsyth girls are the biggest threat to Gibbons tomorrow.  They ranked behind Green Hope in the weekend merge, but were missing #3 Kathryn Anderson.  I think their freshman stars Bailey Reutinger and Eliza Broce could have really big days tomorrow to cap off stellar freshman years.  Though if they're missing Anderson again tomorrow, it's a really big hit.

Panther Creek, Reagan, Apex, Broughton and Providence all will be battling for podium spots tomorrow.  Though it seems like there is a gap beyond the top three schools, it really just takes one breakout day from one girl to make up that gap.  These teams are all legit, and have a realistic shot to finish in the top 2 tomorrow.