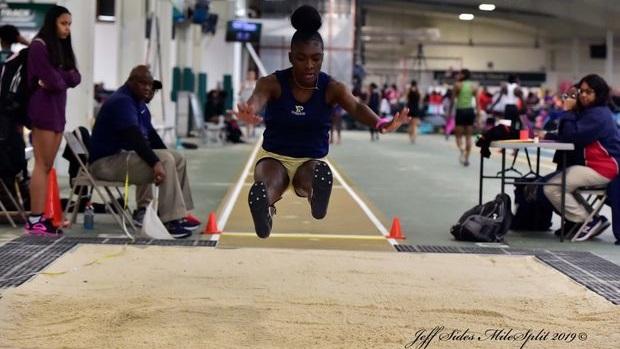 Tamesia Pinnix (Cummings) is the top seed in the 100mH and is arguably one of the best in the entire state. Her time to back it up comes Friday at NC A&T. Her seed time is 14.20, seven-tenths of a second ahead of freshman Mariah Perry (Walkertown), who is seeded second.

Gaby is the top seed in the 300mH, as well. Lukas Valley (Pine Lake Prep) and Cummings teammates Christian Gore and James are gunning for that top spot in the long hurdles.

Mia McMillen (Surry Central) is top seed in the 300mH and holds a second and a half advantage over second seeded Callie Stamey (Maiden).

Joyasia Smith (R-S Central) had a fantastic regional, winning the 100m, 200m, and apart of the 4x100m and 4x200m relays for her R-S Central squad. She is the top seed headed into the 100m, and is seeded second in the 200m. Andralyn Livingston (East Carteret) is opposite of Smith, as she is top seed in the 200m and second in the 100. The two seniors have never raced head-to-head before.

The talent atop the boys 100m and 200m dashes are next level. Eastern Wayne freshman Rahkeem Faison is the top seed in both events, running 10.91/22.09 at regionals. Jonathan Paylor (Cummings) is seeded second in the 100m and fourth in the 200m.

The 2A West was the toughest regional to qualify out of for the boys' 800m out of all four classifications. The top four from the 2A West Regional are the top four overall seeds coming into the state meet. Vance Jones (Patton) won the region in 1:54.77. 2nd-4th were all sub 1:56. David Birkhofer Jr. (Bandys) ran 1:55.22, Braxton Edwards (Polk County) ran 1:55.60, and Daniel Ahearn (Community School of Davidson) ran 1:55.90. Ahearn, a junior, is the only non-senior in the top four.

Six girls were under 2:30 at the regional meets. The top seed honors go Polk County senior Olivia Overholt, who ran 2:22.14 last weekend. Natalie Almond (West Stanly) was the other athlete to dip under 2:25.00.

The girls' 3,200m might be a runaway. Madison Clay's (Patton) seed time of 11:13 is 40 seconds ahead of the second seeded athlete, Paige Oldenburg (Bandys).

The girls of Polk County hold the fastest seed time in the 4x800, 10:14.60 There is a pack of teams all within striking range. Camden County, Community School of Davidson, Bandys, and Brevard are all under 10:40.

The boys' side is looking like a three-team race between Patton, Lincoln Charter, and Owen. They all went sub 8:30 during their regionals. The listed anchor leg for Patton is Vance Jones, who could make all the difference.

In the girls' 4x200m the top three are just as tight. Top seeded South Granville ran 1:46.81 at their regional. Right on their tail is Hertford County and Surry Central, both of which ran sub 1:47.20.

Anson and Eastern Wayne girls 4x100m teams will go head-to-head for the win. They were the only two teams under 50.00 during regional weekend.

T.W. Andrews boys 4x200m are the favorites headed into the event. Their seed time of 1:30.64 is over half a second over the second through fifth seeds. Walkertown, Monroe, St. Paul's, and North Pitt were all under 1:32.00 at their respective regional meets.

Polk County boys and girls are looking strong in the 4x400m. The girls are top seed and the boys are seeded second. Monroe holds the honor for top seeded boys 4x400m team.

Ta'Honny Exum (Eastern Wayne) has been elite this season, and she enters the 2A championship as the top seed in shot put, and is 5th in discus. The duel between her and Amari Williams (Brevard) will be worth keeping your eyes on all day. Williams is the top seed in discus and is second seed in the shot put.

On the boys' side, Austin Cline (Bandys) is seeded second in shot put and fourth in discus, being the only boy to be seeded top five in both events. It will be tough for Cline to double, as the top seed in shot put is Demontae Robinson (Eastern Wayne), who has a seed of 53-0, six feet further than Cline. Charlie Hurt (Owen) has almost a 10-foot advantage from his regional meet over the rest of the field.

Jer'Lisha Pridgen (Southwest Edgecombe) is the top seed in high jump after her 5-4 victory at 2A East. Jessica Jenkins (Northeastern) cleared 5-2, and three girls cleared 5-0 at their respective regionals.

On the boys' side Kinston senior Jaylen Cogdell holds a slight advantage over the field. He cleared 6-6 at his regional, but Ian Cox (East Burke), Tyrese Miller (R-S Central) and Kenneth Byrd (East Burke) all cleared 6-4.

We will also see Byrd in the pole vault and long jump competitions. He is the heavy favorite to defend his pole vault championship.

In the girls' long jump, the Cummings duo of Tamesia Pinnix and Taylor Jordan face some of the toughest competition they've seen at the state meet. They are the third and fourth seed, respectively. Onii Bivens (West Stanly) is top seed with a 18-1.75 leap, however on her shoulder is 18-1.25 jumper Mia McMillen (Surry Central).

In triple jump Tanaia Taylor (Forest Hills) holds a 9-inch advantage over the second seed. The same story goes for Noah Poteat (Cummings), who has a 10.5 inch advantage in seed.