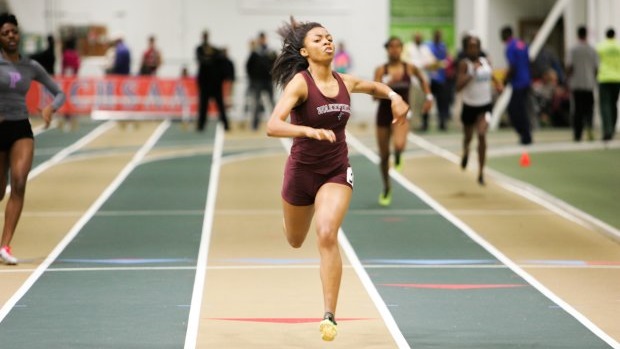 The Wakefield senior continues to improve, and she hasn't even settled into her favorite event yet this season.

Because they are such a close-knit team, and because they follow such a strict and organized schedule at meets, it can be a little hard to get interviews with Wakefield athletes.  In my experience, it has always been worth the effort, as this is the fourth interview I've done with an athlete from the Northern Wake County school, and all of them have been well-spoken young people that represented their team and community extremely well.  Tyra Lea was the MVP of the NCHSAA 4A Indoor State Meet this year, having won the 300 in all-time state record fashion, as well as winning the triple jump and contributing in the 55 and the 4x400.  In this interview, she reveals another talent, and she shows that she clearly upholds the legacy of her past teammates, both in terms of her ability on the track and her composure and personality off of it.  One more common thread between this interview and others with Wakefield athletes: they all go out of their way to recognize their coaching staff, not just for the training they provide, but for the family atmosphere they create among the teammates.  Tyra was delightful to talk to, and I expect she will have more to say before her high school career ends.