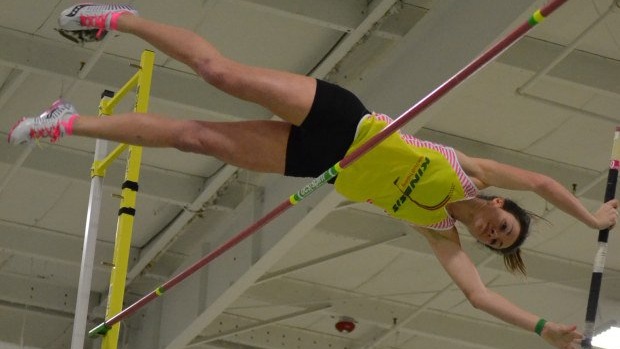 The Green Hope senior has completed her volleyball career, and now moves into a new phase of focusing on the pole vault.

North Carolina continues to produce strong groups of female vaulters, and this year is no exception.  You can tell how much success the NC girls have had in this event by looking at the all-time list: three of the top 6 in state history are current seniors, and two more of the top six graduated last year!  Rayna Yvars cleared a PR of 12 feet at the indoor state meet, putting her in that top 6 and earning a spot among the top 30 nationally.  Rayna is in the mold of Joanna Wright, the former all-time #1 in the pole vault who graduated in 2007.  Both of them excelled in multiple events in high school before moving on to focus only on the vault in college.  In Rayna's case, in addition to her long and successful career in volleyball, she runs the hurdles and competes for a spot on her team's fastest 4x400 squad.  You get the sense that she could also do pretty well in a few other events if she wanted to try (long jump, maybe?).  Rayna is easy to spot at any track meet she attends: just look for the smiling vaulter that seems to be friends with everybody in the competition.  She brings that positive attitude regardless of the conditions or even her success that day, and that might just be a key part of her continued success.  Rayna will have at least one more chance to climb up the indoor vault list if she attends New Balance Indoor Nationals, and she can also move into the all-time top 5 outdoors with just a little improvement this spring.