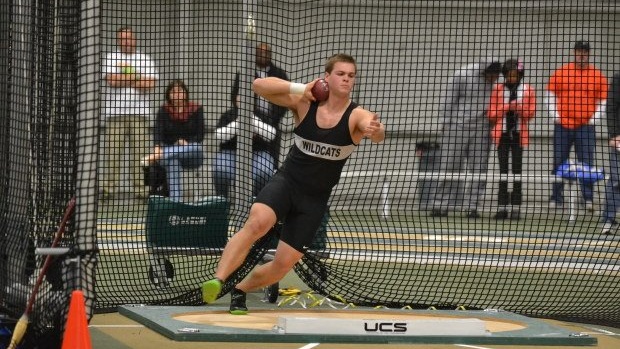 The East Chapel Hill senior has been throwing his best this winter, but is also thinking about expanding his repertoire.

This has been a banner season so far for East Chapel Hill senior Jon Beyle, and that's saying a lot.  The defending indoor and outdoor 4A shot put champion (he also won the discus outdoors), Beyle still managed to open the winter season with a PR of 56' 7.5".  He quickly upped that to 58' 9", which currently makes him 7th in the nation.  For a little while we thought he had even broken the 60 foot barrier, although that result was later disallowed when it was discovered that one of the implements used in the competition was underweight.  It was Jon himself that brought his concern over the light shot to the attention of the official, which clearly shows that he has solid character and cares about the integrity of the competitions he participates in.  Jon is a bit of a rarity in the throws, in that he works on them year-round without taking time away for any other sports.  In this interview, he reveals that he has athletic ambitions outside of the throws, and it will be interesting to see if those materialize at the college level.