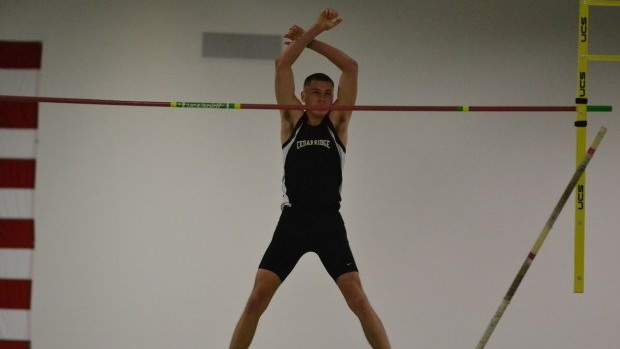 The Cedar Ridge senior talks about his goals for the year, toward which he made significant progress last weekend.

In December of 2011, at the beginning of his first indoor track season, Ethan Smith was a junior with a PR of 13' 6" in the pole vault.  By the time January rolled around, he had upped that to 14' 6", and he went on to win the 1A/2A/3A Indoor state title.  The 2012 spring season would bring a 2A Outdoor state title to match it, as well as a new PR of 15' 3" and a trip to New Balance Nationals.  It's clear that, after his sophomore season, Ethan dedicated himself to year-round preparation for the pole vault, and it has more than paid off.  Following the same pattern this year as last, he has a new PR of 15' 6" from the NCRunners Elite Holiday Invitational last weekend.  This weekend he will be one of the headline athletes in the North Carolina High School Opener, and could come away with yet another step forward in a facility that has a long history of producing great results in this event.  North Carolina has only ever had two boys' vaulters that broke through the 16-foot barrier, and so Ethan would write himself into the state's history if he achieves his goals for this year.