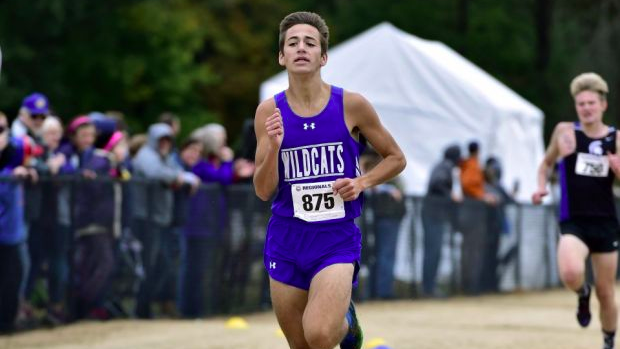 The 1A boys' individual race continued to get more exciting after a regional weekend that saw some big performers.

Lucas Brown (Queens Grant) and Jake Baugher (CSD) have been at the top of the classification all fall, with four head-to-head battles already this season. After Brown got the best of Baugher in the first two, Baugher came back with a 28 second win at their conference championship. In the regional race Brown was back on top again, and Brent Surratt (South Davidson) got in between the two to take second. Jack Herndon (Bishop McGuiness) wasn't far behind in 4th.

The West regional also saw some impressive performances. Drew Zink (Lincoln Charter) continued to impress with a 16:40, and there was a slew of boys around the 17:00 mark. Ryan Jenkins (Swain County) was the only other to get under the mark, but Justin Race (Hayesville) was just a second over it. Richard Lauer (Highland Tech) almost touched his PR from last year's regional meet, which set him up for an eight place finish at the State Meet a year ago. He held off Caleb Potter (Polk County) who has run a 16:32 this season, the sixth fastest time in 1A.

Aaron Rovnak (Franklin Academy) was the most impressive in the Mideast, winning by well over 30 seconds in 16:48, just a second over his Jungle Run time, showing consistency over the course of the season.

If conditions are good, it could take a low 16 or sub 16 time to snag the individual title on Saturday. Plenty of guys are in the mix, and the entire top 10 is in good position to post big times.

Lincoln Charter comes in with a big buffer in the team projections, and posted an 80-plus point win at their regional meet to roll in with momentum. Franklin Academy held off Voyager for a solid win, giving them perhaps the best shot at catching up with Lincoln Charter. Voyager also has top five potential for sure, but they will have to get through third seeded Bishop McGuiness, whose low stick in Herndon and solid five-man gives them the advantage.

Hayesville, Murphy and Community School of Davis have the best shot at crashing into the top five. Race and Baugher give Hayesville and CSD low numbers up front, but Murphy does have a good 1-5 split that could quickly shave off points if they can work together to move up the field.

The girls race should be competitive up front as well, with six of the top 15 girls posting season bests or PRs at regionals. The top five have times under 20 this year, and Victoria Swepson of Research Triangle leads the way with her 19:25, though she was fifth at her regional behind teammates Caroline Foley and McCarty Hudson. Amy Rosie Scott-Benson (Voyager Academy) and Caitlyn Burkett (Franklin Academy) took down all three of them in the stacked regional race.

Lauren Tolbert (Highland Tech) is the only non-Mideast runner in the top four, and her win at regionals backed up her 19:42 at Hare and Hounds to show that she is a legit contender for the individual title.

Abigail Hemric (North Stokes) posted another massive win at regionals and boasts a 19:27 PR to go with her 19:55 season best this year. She is very familiar with this course, which could play to her advantage in a loaded race.

The last two spots in the top five are up for grabs, with Lincoln Charter, Mount Island Charter School, Highland Tech and Thomas Jefferson Classical Academy having the best chances to snag the spots. Tolbert gives Highland Tech the advantage up front, but Mount Island and Highland have better top fives if they perform at their best.