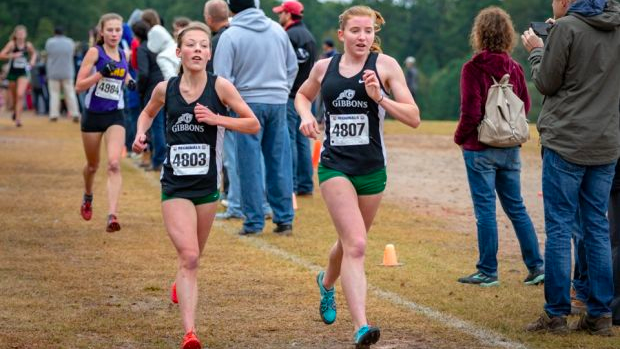 Last year we saw Natalie Tyner (Laney) and Cardinal Gibbons dominate the rest of the field.  Both are back this year to defend.  The girls field looks as if it'll be a three girl race up front between Carmen Alder (Pinecrest), Katharine Priu (Cardinal Gibbons) and Tyner.

Heading into the state meet it's hard to take anything away from what Alder has done this year.  Alder holds a season best of 17:28 from Great American where she placed 2nd in an elite field.  She's dominated every other race she's been in this season.  Last year Alder had an off day and took 8th place.  After getting her first individual titles under her belt indoors and outdoors she'll enter with a little less nerves than last year.

Tyner enters with an 18:05 season best after a strong race last weekend at the East Regional.  Conditions were not great at Boyd Lee Park and the course seemed to run a little slow.  Tyner won by 54 seconds over 2nd place Paxton Chitty (Ashley).  With a setback from Hurricane Florence, this will only be Tyner's 4th race of the cross country season.  Things did not go her way as her planned debut at the adidas XC Challenge was cancelled, and the hurricane caused her to be away from home up in New Jersey while they assessed the damages.  None the less Tyner showed last weekend that she still was in elite form and she'll be gunning to defend her title tomorrow.

We've seen a resurgence from Priu this season who set her first PR in two years last weekend at the regional meet.  As a sophomore she was 5th at the NCHSAA State Championships and the Johns Hopkins commit will contend for the win this season.  She's fresh off a 18:03, the fastest 4A time of the regional weekend and could get a big win tomorrow.

Cora Cooke (Myers Park) is someone you could expect in the lead group as well.  Cooke ran 21:44 last year before breaking out on the track finishing as 4A Runner-Up in the 1000m and running a 5:06 full mile outdoors.  She's continued that success the year running 18:30 and winning the 4A West Regional title.  Shannon Sefton (Panther Creek) is also coming off a strong weekend running 18:26 taking 2nd at 4A Mideast.  She's finished 18th the last two years, and looks to have her best finish yet as a senior.

14 individual girls have broken 19 minutes in this field including Caroline Todd (Cardinal Gibbons), Jade Martin (Apex Friendship), Caroline Mullahy (Cardinal Gibbons) and Lilly Walters (Hough).  Walters showed a lot of fight against Cooke last week at the West Regional where the freshman ran her PR of 18:45.  Todd has been more of a track star in the past, but things have finally come together for her in cross country her senior year.  She'll look for a top 5 finish tomorrow after running 18:43 last weekend.

Since moving from 3A to 4A in 2015 Cardinal Gibbons ended Green Hope's streak of 6 straight team titles and have won three straight.  They were 2A and 3A for a while and dating back to 2005 they've only lost once at the state championships in 2009 to Chapel Hill.  A win this year would make it 9 straight team titles on the girls side in cross country.  Despite a tragedy with Varsity runner Madeline Shook dying from a car crash just a few weeks ago they come in as heavy favorites this weekend.

Gibbon's conference and regional meets were dominant.  They placed their entire top 5 in the top 10 of the region and 4 in the top 6 all under 19 minutes.  This team is going to be tough to beat, and they've run without top returner Sloan Walter most of the year.  Gibbons has Priu up front, followed by a pack of girls from 2-4 in Carolina Todd, Caroline Mullahy and Molly McGowan.  Gibbons has a 1-5 average of 18:49 over the course of the season.

Their biggest competition will be West Forsyth who has a season average of 19:23.  On a good day the Titans have three girls capable of running with the top three of Cardinal Gibbons.  Sophomores Eliza Broce, Bailey Reutinger and Kendall Phillips have flirted with the sub 19 mark throughout the season.  West's 4-5 have run 19:42 and 19:55 this season and will need to be ahead of Gibbons 5th girl tomorrow.  Though Gibbons enter a favorites over them 47 to 95, a big day from the Titans and a misstep from Gibbons makes the whole thing that much more interesting.

Behind West Forsyth their are many teams capable of battling with them for a top 2 finish.  Depending on how things go there are 9 other teams that are likely capable of taking home 2nd place if things bend their way.  Myers Park, Wake Forest, Leesville Road, Hoggard, Hough, Broughton and Green Hope are the top teams amongst that group.  Myers Park won the 4A West Region and have a 19:47 average on the year.  They'll need a strong day from their 2-5 and I don't think we've seen the best of them so far this year.  Wake Forest had a big day at the 4A East Regional as their top 6 girls posted seasons best winning by 31 points over Broughton.  Anything can happen, and a lot of these teams are so close one big day and one off day from an athlete can swing the teams scores significantly.