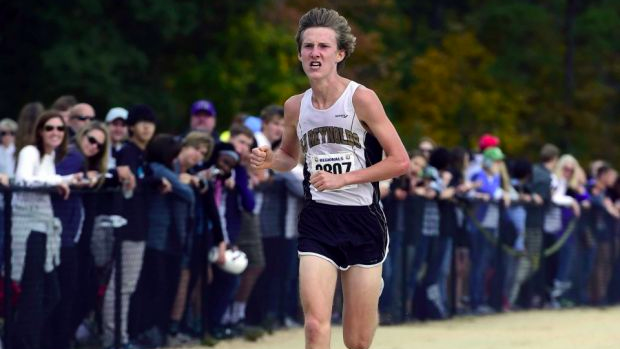 24 athletes head into the NCHSAA 4 State Championship with sub 16 accolades on the season.  Though their are a ton of athletes that will be vying for a top 10 (all-state) finish, one athlete stands out as a big favorite amongst the loaded field.  The man is John Tatter (R.J. Reynolds) who has run 15:00.70 this season.  18 seconds better than the second faster man in the field Peyton Barish (Green Hope).  Tatter is the top returner in this field after taking 3rd as a junior and has been the favorite throughout the 2016 season.  Tatter currently holds the fastest time in North Carolina, and is ranked 19th in the Flo50 National Rankings.

How does Tatter run this race?  Does he take it from the gun and hope to leave the rest of the field racing for 2nd, or does he hang back in the field and rely on his strength to prevail at the end of the race?  If Tatter is beaten it will be a pretty big upset based off how strong he's been this year.

If guys didn't challenge Tatter on Saturday it'd be a surprise.  This is a state championship after all. Peyton Barish should headline that group of contenders.  Barish has clocked 15:18.50 this year, and has dominated a tough Tri-6 conference and NCHSAA 4A Mideast field the last two weeks.  I don't think Barish let's Tatter win this without taking his best shot.

Finn McBride (Green Hope), Sam Thornton (Cardinal Gibbons), Jamie Witmer (Hoggard) and Ryan Brown (Broughton) are four seniors that'll headline the second pack in this race.  They've all been under 15:40 this year.  Witmer had a big breakthrough last week winning the 4A East Regional in a big PR of 15:37 and will look to build off that this weekend.  McBride had a strong finish taking 2nd behind Barish in the Mideast last weekend running 15:34.  McBride came on strong at the end of last season after a slow start to take 7th at the state meet.  This season has been the same story to this point, so we'll see if he can once again perform at the state meet once again.

Recent Furman commit Thornton comes in with the fourth fastest time in this field holding a PR of 15:37 where he won the CAP 7 Championship over Brown.  Thornton was 6th at 4A Mideast, but it wouldn't surprise me if he finished higher than that at the state level.  Brown was 3rd in the East region behind Witmer and Nickolas Scudder (Millbrook).  Brown has been a big talent for the Capitals throughout his high school career and will look to end a very strong senior year on a high note.

Joey Bream (Panther Creek) and Nickolas Scudder are two guys that could be battling for the individual crown next year.  Both of these juniors have been some of the states biggest breakout stars this fall holding PRs of 15:38 and 15:41 respectively.  The field up front is pretty heavy with seniors, but these guys along with Reed Blackman (Green Hope), Jackson Martin (Cary), Anton Idhammar (Cary), JJ Malach (Broughton) and many others are apart of guys that could have major success as sophomores or juniors.

Others that are candidates to break the top five tomorrow are Wesley Provost (Apex Friendship), Ares Epps (Green Hope) and Marshall Williamson (Myers Park).  Provost has been a leader for Friendship since the school opened in 2018.  He's the only athlete on the team with state meet experience, and will be looking to lead this program to big success at their first appearance at the state meet.  He's run 15:41 this fall.  Epps (Green Hope) was 22nd in this meet last year.  A week before he was 22nd at 4A Mideast narrowly making the meet.  This year he comes into the meet off the best race of his career running 15:40 taking 4th in a loaded Mideast region.  We thought Epps could be a top 10 guy in the whole state coming into the season.  After a slow start it looks like that prediction could come to fruition tomorrow.  Williamson was the West region champ last weekend.  He has the 15th best PR in the field and was 32nd here last year.  But on the track Williamson proved he was one of the top boys in the state running a 20 second PR in the best 3200 field the states ever assembled.  Williamson should be in for a big race Saturday.

I hate to admit it leading into a state championship, but let's be real.  No one is going to beat Green Hope this weekend, and if they do fall something drastic happened.  24 boys in this field have been under 16, 7 of them are Falcons.  The next closest to that is Broughton and Cary with three under 16, which puts you as a contender for the team title most years.  Green Hope could place 7 in the top 20 this weekend if things go well for them.

The East and the Mideast ran on the same course last weekend.  Though Broughton ranks 2nd in our virtual meet heading into the meet and were the East regional champions Cary, Apex Friendship, Panther Creek and Leesville Road posted better team performances than the Capitals.  Add in Millbrook to this group and I think there are 6 teams that'll be battling for a podium spot this weekend, and the results going to be different every time they race.

Cary have had a very tight 1-5 gap this season being around 20 seconds.  Last weekend we saw that group to 41 seconds, but that's due to Jackson Martin, Anton Idhammar and Brian Picone having big PRs to lead the charge for the Imps.  This team returns their entire team and will likely be the favorites heading into the 2018 season.  The Imps will be looking to go from 9th in the Mideast, to 2nd in the 4A in just one year.

Apex Friendship boys entered the season as the #3 returning team, and after it looked like things might not work out for them they went on to explode at the conference and regional level.  They're lead by Wesley Provost and Alex Atteberry who hold PRs of 15:41 and 15:53.  Two seniors that have seen this program build from the ground up.  For a school that's only been running for three years, a podium finish would tell a lot of what's to come from this school in the future.

Though Broughton was 6th in the team merge last weekend, I don't think much of it.  The Capitals they haven't missed the podium since 2010 and have won 5 of the last 6 4A team titles.  They have a mix of returning state champions in seniors Ryan Brown and Jacob Wells, and tons of young talent that'll be the future of this program.  I wouldn't be surprised to see Broughton have a big day tomorrow and they'll need that to come from their 4/5.

Panther Creek is led by their #2 man in senior Jarred Komyati who is coming off a PR from regionals at 15:56.  A big part of their team success has been the rise of top man Joey Bream emerging as one of the states top individuals.  Beyond that they're young with two sophomores and a freshman making up their top 5.  This is a program that's going to be in contention the next two years, but they'll look to send off their senior with some hardware before the focus is on that.