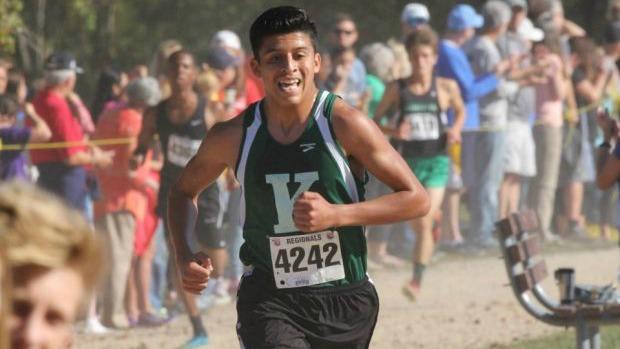 Senior Brandon Hernandez, of A.L. Brown High School in Kannapolis, thanks his step-mom for encouraging him to give running a try. In middle school he assumed he would be a basketball player "like my whole family. And I did want to play but I ended up being a runner which changed my life."

Hernandez recalls, "I broke the school mile record that hadn't been broken in 13 years. I broke the record by 9 seconds running a 5:04. I knew from that point on that running was something I wanted to take seriously and keep doing for years to come. I thank God who has given me a chance to do what I love everyday."

Despite setting the middle school record in the 1600, Hernandez prefers longer races. He says, "My favorite event is the 5k or longer. I would like to move up to marathon running maybe in the next 2 years. My least favorite would be the 800 meter run; anything under a mile I do not like, for me the longer the race the better."

Hernandez's coaches Lindsey Walborn and Nicole Morgan describe him as a "natural runner who works hard to be better and each race he strives to improve."

In order to prepare for the longer races of the cross country season, Hernandez enjoys interval training. He reveals, "My favorite workout is a ladder workout on the track that consists of 400,800,1200,1600 and then you go back down."

The Nike clad runner used this training to help him capture bronze at this season's Hare and Hounds race at Charlotte's McAlpine Park clocking a 15:43.84 PR. He moved up four spots from the 2016 campaign and improved by half a minute. Despite the PR he says, "I was happy but I know I still have lots of practice and improving to do." 10 days later he successfully defended his Cabarrus County Championship title in 16:06. Coming off last year's cross country season he earned his 3200 m PR in 9:39.30.

Although he professes to not have a favorite cross country course, he allows, "What is true about XC is that to me every single race is difficult and every course is different even if you run on the same course multiple times a season everyday is a different day."

Hernandez spends time in prayer and focuses intently before his competition. He admires professional athlete Eliud Kipchoge of Kenya. Hernandez says, "he's a marathoner who has won 8 out of his 9 major races. He was in the Breaking 2 Project to see if he could break 2 hours in the marathon and he was really close running 2:00:25. Kipchoge says, 'No Human is Limited'."

Hernandez enjoys his science classes during the school day. He says, "I do hope to run beyond high school at the collegiate level and I really want to become a professional runner one day. I take running very seriously and it is something I want to do for a very long time." His coaches add, "Brandon sets a good example for his teammates and every member of the team enjoys being around him.  Many of the underclassmen look up to him and aspire to be an athlete like him."

In his humble way he confesses, "I am just a regular human being I am no different from my teammates. All I do is train and run everyday and develop as a runner and develop as a person everyday. I wouldn't be able to do this without the help of God, family, and good friends and people around me."