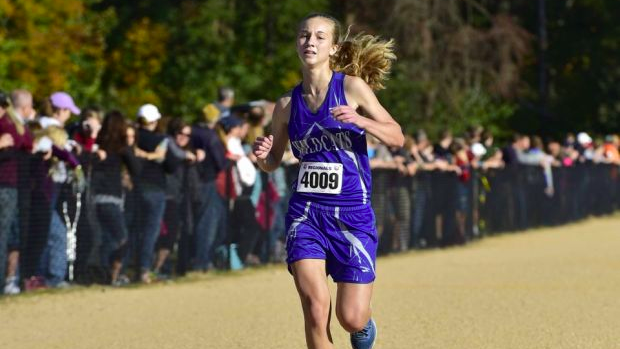 Since her freshman year at South Davidson, Hannah Cranford enjoys training on the narrow, country lane she lives on. She says, "There are corn fields for miles, along with a farm and hundreds of cows. [The road has] a good number of hills and I have an eight mile loop that I run." She ranks this workout as her favorite.

Cranford earned a top 10 performance in the Girls Invitational division at this year's Friday Night Lights where she clocked 20:38.23. She says, "it's my favorite XC course. We race Friday Night Lights, Regionals, and States there. It's a pretty fast course to run on. There are not a lot of hills and there has always been great competition there."

When she's preparing for a race, she "clears my mind and thinks about how I'm going to race.  I listen to music and one song I listen to every time before I race is 'Hall of Fame' by The Script.  I do a set of routine stretches as well." Cranford competes in Mizunos.

She describes her high school as "a small 1A school. I've never had a group of girls to train with." Jordan Morris, the Assistant Athletic Director at South Davidson praises her saying, "she's one of the best female runners in 1A in the State, year in and year out.  She trains with the guys who have a full team. Hannah attends the only 1A school in a county of 9 schools that range from 1A-4AA and dominates the competition." She used this training to help her capture the Davidson County Championship last fall in 19:41.57.

She considers "bouncing back from a bad race and clearing my mind and moving on to the next one" in track as her biggest strength. On the oval, she prefers the 1600 to the 3200. Outdoors she has a 5:27.00 PR in the shorter distance and grabbed bronze as a sophomore at NCHSAA 1A State Championship with that time.

Cranford, who plays basketball for the Wildcats as well, recently gave up AAU basketball to focus on training for cross country and track. The Larry Bird and Michael Jordan fan confesses, "It was not as hard giving up AAU as I thought.  I think I was getting burned out on it.  I knew that I could go further with running than I could with basketball, so it made it easier to give it up.  Since it was my senior year I wanted to focus more on running." With a little over 50 points, she'll crest the career 1,000 point milestone.

Cranford has had interest from colleges and she "looks forward to running after high school!"