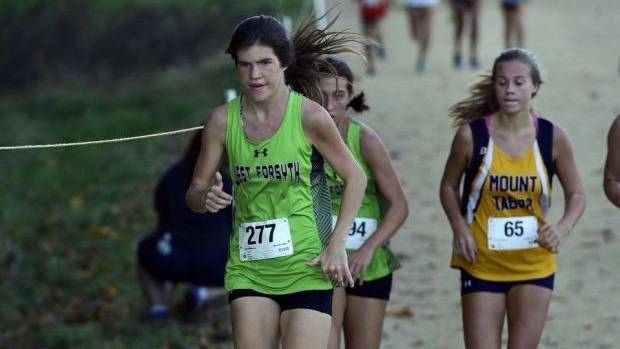 Kathryn Anderson, a pony-tailed team captain at West Forsyth, hung up her cleats and high tops to focus on running. She confesses, "I played basketball for 4 years and soccer for 9. It was hard to give those sports up but I'm happy I did."

Anderson had won her fair share of dual and tri-meet contests over multiple distances. Still, she has her sights set on improvement. She says, "I have run varsity cross country and track throughout high school. I know almost everyone who is considered big in NC high school running and their times.  I'm not big yet and I'm hoping when I get to the end of my senior year that people from other teams will know me. I have put a lot of dedicated hard work into running. I know that not every run will be my best, but I just have to keep working hard to keep getting PRs." She began this cross country season claiming silver and racing to a 75 second PR at the Norman Trzaskoma Invite (Forsyth County Championship). Her effort helped her team take home this year's trophy.

The West Forsyth Titan owns PRs of 11:29 on the oval in the 3200 and a cross country 5k of 19:32 at last year's Hare and Hounds Invite. She says, "I love long distance races. I'm more of a two mile or longer type of runner. My least favorite event is the 800m. I have always had bad luck in it. I've been spiked by the competition so badly that their spikes ripped mine and drew blood. Somehow I still managed to finish the race."

Anderson lists the Hare and Hounds course at McAlpine as her top choice. She reveals, "when I run there, I always get a PR. I also like the scenery; it is pretty so when I am running I get to look at nature rather than just the ground." When training she "prefers Salem Lake or Tanglewood Park in Winston-Salem."

Anderson considers herself a positive person and uses mental imagery to help her race. She shares, "when I run, I don't let my mind go negative. I picture myself running that course and taking the hills with ease and pushing right through it. I just ran the Forsyth City/County Championship meet the other day. We ran the hilly 2-mile course at Ivey Redmond. There is one hill that we do twice that is a more gradual incline compared to the others. That hill got the best of me every year, until the other day. I basically told myself that I will not let this hill cost me this race. Therefore, I ended up defeating that hill twice and with enough energy to finish the race strong in runner-up, and a PR in the 2-mile. Running can be very psychological."

On race day, Anderson participates in a few rituals. For example, she describes, "I wear my lucky blue sports bra and my tie dye socks." She continues, "my team has an amazing cheer before each race: 'We are all for one, and one for all, together we stand, together we fall, go run, go fight, go win, 1 2 3 West is the best!' After that cheer, I always feel pumped up and ready to run." When she's circling the track or covering the course she sports "Saucony light weight spikes and Feetures socks."

Anderson, who enjoys her history classes so much she'll graduate with six AP credits, plans to compete post-secondary. She declares, "I will run in college. The where part is still being decided but hopefully by the end of cross country season I will have an answer!"