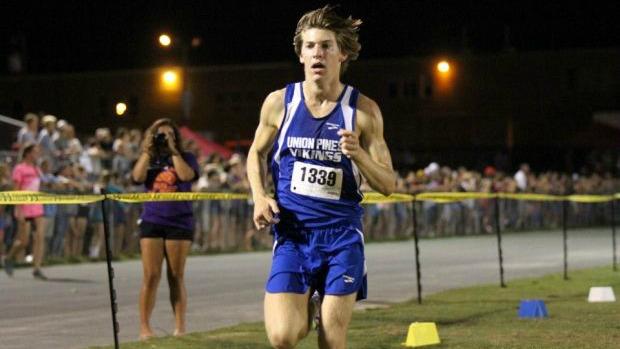 Plenty of the states top athletes will head to McAlpine tomorrow morning with a very wide open boys field.  Ben Mitchell (FCDS) has the top PR in the field of 15:38 from last years NCISAA 3A State Championships, but will be challenged by junior Ben Verchick (Union Pines) who is having break out season.  Verchick clocked 15:40 last weekend at the adidas XC Challenge and looks to be the favorite heading into the weekend.  But the depth of this field goes on with Noah Dolhare (Providence Day) and Marshall Williamson (Myers Park) who ran 15:48 and 15:51 last weekend respectively.  I think both are capable of challenging for the win tomorrow.

Chase Condra (Peachtree Ridge, GA) comes in as the best out of state athlete and holds a PR from his sophomore year of 15:51.  He's run 15:54 this season and will be looking to take the "Hare" trophy back to Georgia.  Brandon Hernandez (A.L. Brown) has been having a great senior season but hasn't seen a big field since he ran 16:13 for 6th at the Providence Invitational.  But I do expect Hernandez to content up front tomorrow.  Haven Honeycutt (Asheville) was one I expected big things from last week at adidas, but looks to have had an off day taking 38th overall, which can easily happen in a field as loaded as that.  If Honeycutt is indeed in good shape he would be able to contend for the win.

A big battle to watch within this race is Luke Evans (Westchester Country Day School County Day School) vs. Connor White (Christ the King Catholic).  in 2015 Evans won the NCISAA 2A Individual crown, but it was White who upset him a year ago.  White has been strong this year and clocked 15:58 last week at adidas, while this will be the first big race we see Evans in this fall.  Also Brian Risse (North Lincoln) looked strong last week at adidas winning the Invitational Race in 16:12 with a good gap on the rest of the field.  We'll see what the junior will be able to do with more competition up front this weekend.

Also in this field will be Ares Epps (Green Hope) who will look to lead a shorthanded Green Hope team to a Hare & Hounds title.  Epps clocked 16:14 in a tempo effort a few weeks back at Friday Night Lights and will look to crack 16 this weekend.  Also keep an eye on the freshman star Murphy Smith (Ardrey Kell) who clocked a 16:16 last week at adidas.  He seems to be the real deal and could be one of North Carolina's future stars as he gets older.

Team wise it looks like despite resting all but one of their top 7 guys that Green Hope comes in as the favorites.  When you remove their athletes not racing the Falcons still score 144 points.  But it isn't going to come easy, Myers Park, Millbrook and Providence Day have all been solid this season and will be in the hunt as well in what I project to be a close 4 team race.  I'm also keeping an eye on the North Lincoln boys who looked really strong at adidas last weekend.

Sarah LaTour (Cuthbertson) has been on a tear this cross country season earning wins at WNC, Friday Night Lights and Union County.  She's already surpassed her 2016 PR running a 18:16 at Friday Night Lights two weekends ago.  Though it seems like it'll be tough for anyone to challenge Latour in this field, there is still some talent behind her in frosh Madeline Hill (Cuthbertson) and Izzy Evely (Lake Norman Charter).  Hill has been very impressive so far this season and what I'll be watching is if she can take down Carmen Alder's time of 18:33 on this course.  Hill has clocked 18:31 this season, but on a different course.  Evely had a big race last weekend running 18:34 to take 5th at adidas.  I expect her to challenge the Cuthbertson teammates up front.

Former NCHSAA 2A rivals Anna Bristle (Parkwood), now 3A, and Anna-Kathryn Kilby (Forbush) have both been strong this season with Bristle running 18:39 and Kilby 18:41 this year.  Bristle was just behind LaTour and Hill at their county meet on Tuesday.  Mary Kathryn Knott (Peachtree Ridge, GA) will be the top out of state girl heading into this weekend and has run 18:41 as a junior.

Alexis McDonnell (Hough) is going to be one to watch in this strong girls field.  She's had a breakout year thus far and I only expect her to continue that from here.  McDonnell didn't break 20 last year and now has a PR of 18:48 with a lot of high finishes against big fields.  Lila Peters (Sanderson) had a strong run last weekend at adidas clocking a PR of 18:46 and will be one I expect to compete up front.

Similar to the boys we'll see a preview of what's likely to be a NCISAA 2A individual crown in Olivia Lackner (St. Thomas More) and Olivia Sutter (Carolina Day) who are the top two returners in the classification after taking 4th and 3rd last fall.  Other battles to keep an eye on is Evely vs Kilby vs Ava Findlay (Brevard) who look to be the NCHSAA 2A favorites at this point in the season.

The Cuthbertson girls have been strong early on in the season and after a midweek loss to Weddington at the Union County meet, they'll be ready for a battle with Green Hope this weekend.  Green Hope hasn't really raced a lot of the strong NC competitions or likely showed their full hand this season.  But Cuthbertson have the potential to go 1-2 in this race and have a lot of depth as well, so the Falcons are certainly in for a battle.  Also Carolina Day have gotten off to a slow start as many of their girls swim or compete in other sports prior to the XC season.  We'll see how far they have come since their last meet.