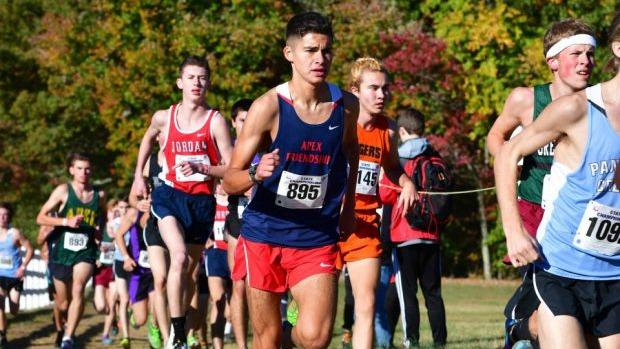 Apex Friendship returns their first ever senior class in school history, and will be ready to try to make the podium this fall at the NCHSAA 4A State Championships.  Apex Friendship has an interesting history as 2015 was the first year the school opened.  Seeing a program rise this quickly to being one of the best in the state shows that they're going to be a program that'll be around for a long time.  Something different this season is that Apex Friendship will have this season is athletes form four different grades.  When the current senior class moved to the new school as sophomores they were the oldest students at the school.  Wesley Provost has been the star of this program from the beginning, and he now will look to lead them to their first state championship as a team.  Provost holds PRs of 4:20, 9:29 and 16:01.  He's also the only boy on their roster to run at the NCHSAA 4A State Championships after qualifying as an individual last season and taking 44th overall.  Provost has been the top guy for this program since the start and I'm expecting him to have a big senior year.

Alec Atteberry has a big junior year on the track running 1:58 and 4:26.  Last year in cross he improved around 40 second from his sophomore year running 16:32.  Atteberry will be a rising senior, and based off his success on the track last spring he should be in for a big season in XC.  He should combine with Provost up front to be a strong 1-2 heading into XC.  Tim Haughton should be in for a big season after having a monster freshman year on the track.  Haughton holds PRs of 16:47 in XC, but ran 4:26 and 9:45 on the track.  He was 6th in the loaded Mideast region last fall and has proven he's much better than his PR.  I'd think he would run in the low 16s if not under this season if everything goes well.

Ryan Cunningham will combine with Atteberry and Provost as the senior leaders of the squad and was their 5th man last fall running 16:57.  Cunningham has been consistent over the last two seasons, but they'll need him to step up some in his senior season.  On the track he did show improvement running 2:00.99 in the 800 and 4:42 for the 1600.  Joshua Carlson could have the potential to breakout this season after a great freshman year on the track running 4:46.  Cunningham should be significantly ahead of where he ended his XC season last year running 18:03 and will look to impact their top 5 this fall.

Cameron Adair had a big sophomore season running as Apex Friendship's 3rd man clocking 16:44.  Adair ran a few steeple's on the track running 6:35 for the 2K.  Most steeplers really enjoy cross country, so this might be his strongest of the three running seasons.  He also held a PR of 10:05 in the 3200 last fall and should be ready for a big junior year.  Apex Friendship has a lot of depth with runners that could break out for them this fall in Naim Bell, Michael Stephens and Michael Curcio who all were sub 5 in the 1600 on the track last season.  They also have Cole Bouquin returning who was their 6th man last fall running 17:22.  I really like the potential of this Apex Friendship team and have been very impressed on their rise to being a top team in North Carolina.  They have the talent to be a podium team this fall in 4A, but I think it's certainly going to be tough as all but Provost don't have the experience of running at the state meet in years past.  But their top 5 is very solid and I think the sky's certainly the limit for this team.  Last year they were just three points out of making the state meet, so expect these boys to be out for revenge this fall.