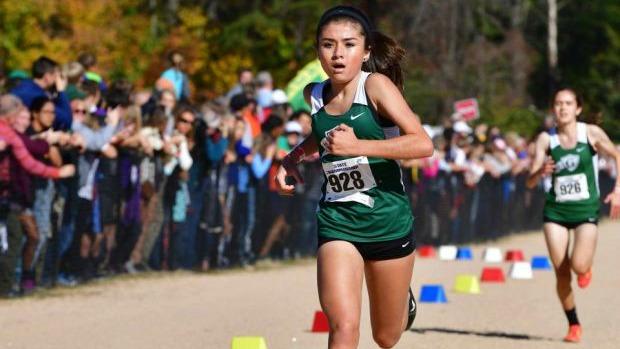 Cardinal Gibbons return 6 of 7 girls that were on last years team that took 3rd at the NXN Southeast regional, 20 points off of Lake Braddock.  Though their graduation of Annie Pierce is a lot more than it would seem on paper as Pierce was a big leader of this relatively young team.  Pierce ended the season 15th in the Southeast region, but I think Gibbons certainly has the talent to replace her on the XC course.  Top returner for Gibbons will be Sloan Walter who holds an XC PR of 18:05 and ran 11:00 for the 3200 last season.  Walter was 4th at outdoor states on the track for the 3200, 4th in XC and 8th in the NXN Southeast region narrowly missing an individual spot at nationals as well.  Walter looked very strong at the Wake County Kickoff the other week running 9 seconds faster than last year winning in 10:55.  She's the top returner for the 4A State Championships and could be the preseason favorite to win the individual crown.

Marissa Bishop will be a senior this fall after three really strong years at Cardinal Gibbons and will be looked at to step up this season. Bishop has been 5th, 3rd and 9th at the state championships in XC and with her consistency over her career should be a lock to be in the top 10 once again this season.  Bishop took 3rd outdoors at the state meet running 11:03 and holds an XC PR of 18:17 from her freshman year.  Last year her fastest time was 18:26.  Will Bishop be able to get under her PR this season? Katharine Priu was a monster for Gibbons last fall running 10:42 for the 3200 and 18:13 at the state meet last fall. Priu had a big improvement last season going from a 19:38 girl at the end of the season to being sub 19 in ever race as a sophomore.  Priu went from 28th up to 5th at the state championship from 2015 to 2016.  But we haven't seen Priu race since NXN Southeast last fall leaving questions if she'll be back racing this fall and if she can get back into the form she was in last season.  Priu is a star, and the talent is certainly there for her to have a big year if she can bounce back and be healthy this XC season.

Caroline Todd is the #5 returner for Gibbons, but has shown that she's likely a breakout star this fall. Todd's PR comes from her freshman year where she ran 19:36, but she proved on the track that she's certainly taken the next step forward.  Todd ran 3:04 for the 1000 taking 6th indoors, 5:17 for the 1600 and 2:21 in the 800 last season.  Her 1600 was a 33 second PR and even though she's likely more middle distance focused than XC, I think Todd is the obvious breakout candidate for Gibbons this fall.  They'll return Hayden Callahan as their #4 who will be a senior this fall.  Callahan has only really ran XC for Gibbons with a few track races as well. She'll be a senior this year and after going from 20:27 to 19:25 last fall they'll hope she returns to the team in as good of shape as she left.

Molly McGowan definitely has a lot left in her in cross country after running 5:22 and 11:33 last spring.  McGowan was 5th at the 4A Midwest regional last year just missing qualifying for the state meet.  In cross McGowan was 24th in the 4A State Championship after taking 18th at the Midwest regional the week before.  Magdalen Lavelle will be a sophomore this season and will be fighting for a top 7 spot once again this season after running 19:55 as a freshman.  Alina Rovnak looked to be in great form at Wake County Kickoff running the 15th fastest time of the day.  On the track she had a big breakthrough running 5:30 for the 1600.  After missing the top 7 last season it looks like she's ready to fight for it this fall.  Beyond Rovnak the depth only continues with Anna Guarino, Audrey Smith, and Angelica Rock. Gibbons will brig in a lot of strong freshman lead by Caroline Mullahy and Courtney Farishian.  They took 2nd and 5th in the 9-10 girls race at Wake County and will likely only continue to improve as they learn cross country and the season goes on.  Gibbons has tons of depth and could have well over 10 girls breaking 20 minutes this fall.  I think they're heavy favorites to wear the NCHSAA 4A Crown once again this fall and will have their sights set on the NXN Southeast Region.  If they're better than they were as a team this season than they were last season I think their chances of making NXN as a team is massive.  They return as the #3 team in the Southeast this fall.