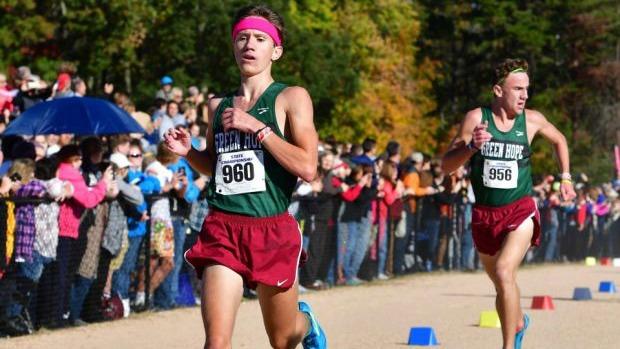 A year ago Green Hope came up one point short to Broughton of winning a NCHSAA 4A Team Title.  The score was 67 to 68 and the Falcons would have won the tiebreaker by having the faster 6th man.  From that team Green Hope only losses their 7th man Nick Veilleux and bring in Ares Epps to replace him in the top 7.  Green Hope should be one of the top teams in the country this season and will have their eyes on a NXN birth later this fall.  Though the Southeast Region will be tough with Loudon Valley (VA), St. Xavier (KY) and Green Hope all coming in as top 10 teams in the nation.

Peyton Barish and Finn McBride will be the leaders of this senior heavy team and took 8th and 7th at the NCHSAA 4A State Championships last fall. Barish holds the better PR at 15:26 and is more longer distance oriented than McBride.  Barish ran 4:26 and 9:34 last fall and took 9th at the state championship in the 3200.  Barish has cracked the varsity squad the last two years and will be looking to make his final year something special.  McBride slightly struggled in the early parts of the season, though he wasn't running poorly, I just knew he had higher expectations.  But when the regional meet came around McBride had his best race of the season running 15:38 taking 2nd overall, his first time under 16 and a 37 second PR.  On the track McBride improved to a 4:15 converted 1600 and took 4th at the NCHSAA State Championships.  McBride also ran 9:27 for the 3200.  I expect Barish and McBride to combine for a strong top 2 for the Falcons this fall.

Ian Delgado will return as Green Hope's #3 man this fall and though he's more of a 800 runner on the track he's still great in XC showing tremendous range.  Delgado holds an 800 PR of 1:52 and a 5K PR of 15:47.  Delgado's range from 800 to 5K continues to be one of he strongest assets as a runner. Daniel Vo was strong for the Falcon's last season running 16:03 and taking 23rd overall at the state championship as a junior, improving on his sophomore year finish of 39th.  On the track Vo had his best year yet running 4:28, 9:40 and 2:01.  He took 5th at the Mideast regional in the 1600 and was on the 4x800 state championship squad last spring.  Delgado and Vo bring back a ton of experience for Green Hope and will combine with Barish and McBride as strong senior leaders of this massive program.

Ares Epps comes in giving Green Hope a tremendous edge after rung 1:56, 4:19 and 9:48 for the Falcons in track.  Epps moved to Green Hope in January and pretty much immediately had success under the new training program.  Epps was apart of both the 4xMile and 4x800 that were All-Americans at New Balance Outdoor Nationals.  Epps narrowly made the state meet last fall in XC after taking 20th at the Mideast Regional for Knightdale.  He went on the next weekend to take 22nd at the state meet.  Epps holds a PR of 16:14, but I think he's going to be capable of a lot more this fall.  Epps has the talent to run up front with Barish and McBride up front if summer training has gone well for him.

Beyond these five Green Hope has plenty of guys that are capable of being under 16 minutes this fall if they get the chance to race.  Reed Blackman and Ryan Kemper return with PRs of 16:07 and 16:11 and were in the top 7 last fall.  It'll still be tough for these guys to hold onto their spot in the top 7 due to the ridiculous depth Green Hope have up front.  Spencer Cowley and Thomas Vo also have been strong and will look to contend for a top 7 spot.  Cowley was 7th overall in the junior senior 3K at the Wake County Kickoff running 9:34, but holds a PR of 16:53 for 5K.  They'll also have guys like Matthew Kehn, Michael Biddle and Luke Bakley coming off big track seasons. Kehn is certainly more of a track focused guy with PRs of 1:54 and 4:26.  Biddle ran 2:00 last spring on the track and was the teams 3rd man at the Wake County Kickoff.  With this program there are truly too many guys to name off as Green Hope's JV team would like my our top 25 if they were eligible.  There are going to be some guys capable of a top 30 finish at the 4A State Meet not making the top 7 most likely if their success continues.  My questions for them coming into the season are are they going to be able to get an auto spot to NXN out of the Southeast Region and will this team go down as the best cross country team in North Carolina history?  It might take a while to see these boys at full strength as their focus now shifts to beyond the state meet, but when they do it's going to be something special.