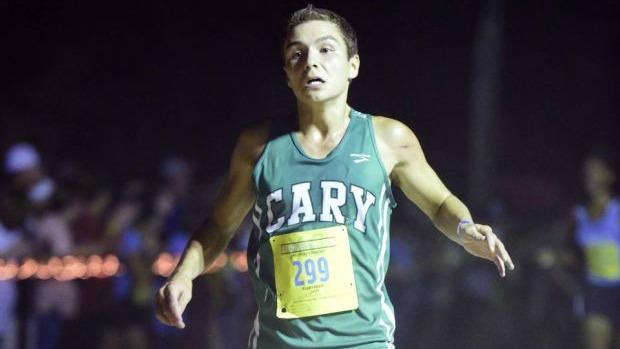 Last season Cary boys had one of the tightest 1 through 7 gaps in North Carolina with just a 43 second gap throughout the entire season.  Cary lose their #1 and #4 from last years squad, but they truly ran in a different order with each race of the season.  Despite ending the year as the #16 team in North Carolina based off PRs, Cary took 9th after an off day at the 4A Mideast regional.  This Cary team will have likely no seniors in their top 7 meaning they're going to be in for a big 2018 season after likely a lot of success in 2017.

Junior Stephen Atkinson returns as their top man after running 16:36 last fall improving over a minute from his freshman year.  On the track Atkinson ran PRs of 2:02 and 4:34 showing he's ready to take the next step forward.   Atkinson did however peak during the early stages of the season running his 16:36 at the Adidas XC Challenge.  But Atkinson will come into the season much more experienced and now focused on helping his team advance to states rather than trying to make the varsity team. Junior Anton Idhammar had the best track season out of the returning group running 2:04, 4:27 and 9:48.  He took 6th place at the NCHSAA 4A Mideast region last fall which was a very deep field.  Idhammar holds a PR of 16:59 from last season and ran in the 17s for the majority of the season.  I think he's shown he's stepped up his game from last year and could be a sub 16 guy this fall.

Jackson Martin returns as the Imps #2 man a PR of 16:42.  Martin was Cary's #2 man at the regional meet last fall taking 32nd overall and will certainly be in the mix as one of their top guys this fall.  Martin ran 4:32 on the track as well as a 9:57 3200.  Martin's 1600 was 13 seconds faster than his PR his freshman year.  Martin came into last season running 18:29 and improved steadily over the course of the season. He's going to come into the year with much higher expectations for his junior year.  Brian Picone showed a lot of improvement on the track last fall running a 4:43 1600 cutting off 22 seconds from his freshman year.  Last fall Picone was a surprise in XC as he ranged from 18:45 to 20 minutes over his freshman year.  Picone ran 17:07 coming up big making the Imps top 7.  This year he will return as a top 5 runner and will need to continue to improve on the cross country course.

Where I slightly worry about this Cary team is with their 5th man as they don't seem to have a ton of depth beyond their top 5.  They do have a 1:58/4:33 guy from last outdoor season in Luke Militello who hasn't run XC since his freshman year.  Though he has run track his times during his junior year were significantly faster than before meaning he's possibly taking the sport more seriously.  That would be a massive addition to the Imps top 5 pack.  Likely 5th man is Griffin Nicholas who ran 16:59 as a freshman and after a strong indoor season running 4:43 for the 1600 he missed the majority of the outdoor season only running a few races in March.  He's proven he's a strong XC runner for sure, but possibly returning off injury has me worried if he will be able to keep up with his teammates up front.  Ted Sielatycki and Sean Mars will both be juniors who ran under 5 minutes last spring and could be an influence in the top 7 this fall.  Having big team success this fall would be massive for the Imps heading into the 2018 season.  But I have no doubt that this is the season the Cary boys team returns to the NCHSAA 4A XC State Championships.