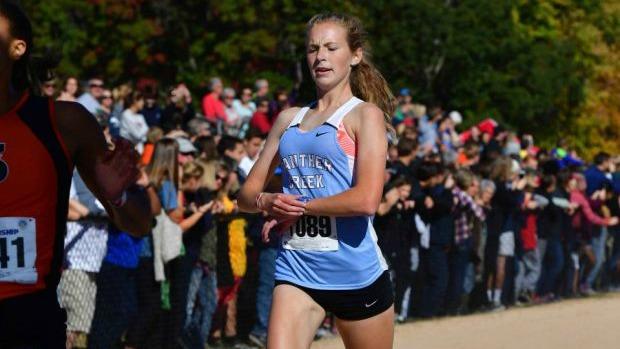 Last season Panther Creek needed a breakout runner, and they got it with Shannon Sefton who joined the cross country team after a stellar freshman track season.  Sefton lived up to her coaches expectations on the cross country course and ended the season with a PR of 18:41 and was 18th at the NCHSAA 4A State Championships.  Sefton took 2nd at the 4A Mideast regional in XC which is where she ran her PR.  She improved with pretty much each race as the season went on and should be much more comfortable running XC this season. Sefton continued her improvement on the track running 2:23, 5:08 and 11:49.  The Catamounts will need Sefton to continue her strong career and to be a leader of this team.  I think she's got a lot more left to do on the XC course.

Lia Greengrass will be a senior this season for Panther Creek and showed a lot of improvement last season and has taken big steps with each season.  Over the last three seasons Greengrass has went from 22:47 o 21:08 to 19:53.  She individually qualified to the NCHSAA 4A State Championship last fall taking 59th overall.  On he track she went down from a 5:47 1600 to a 5:38 and ran 12:18.  Lydia Connor returns with a PR of 20:01, but looks to have a big season coming after a strong track season.  Connor set PRs of 2:26 and 5:29 in the 2017 outdoor season, both big PRs. Connor's PR comes from 2015 as last year her best mark was 20:42. It took he a little longer to get going last season, but after a lot of track success Connor is primed for a good senior XC season.

Charlotte Greengrass ran a PR of 21:12 in XC last fall cracking Panther Creek's top 7 as a freshman.  Greengrass came on strong at the end of the season where she PRed big after being in the 22s or high 21s for the majority of the year.  Greengrass clocked 5:40 for the full Mile last track season and certainly has the potential to be great in XC this season.  Sierra Foster was Panther Creek's #3 last year running 20:42.  Foster's PR in XC comes from her freshman year where she ran 20:25.  Foster has been on the varsity team at PC for all three years so far.  Despite not PRing in XC for two years, she showed big improvement on the track last year.  Foster ran 5:44 in the 1600 last year, an 11 second PR.  This should be the year she bounces back and finally improves on her PR.

Panther Creek returns a lot of depth that will contend for their top 7 this season. Addison Baker, Isabela Yengling and Taylor Stone are all heading into their sophomore season and broke 6 minutes in the 1600 last outdoor track season.  Chloe Flack and Evelyn Foster also return giving PC even more depth.  Flack ran 20:47 last XC season while Foster ran 21:02 only racing once during the year.  Panther Creek has plenty of talent heading into the fall and after a two year hiatus from the NCHSAA 4A XC State Championships the Catamounts look poised to return to the state championships.