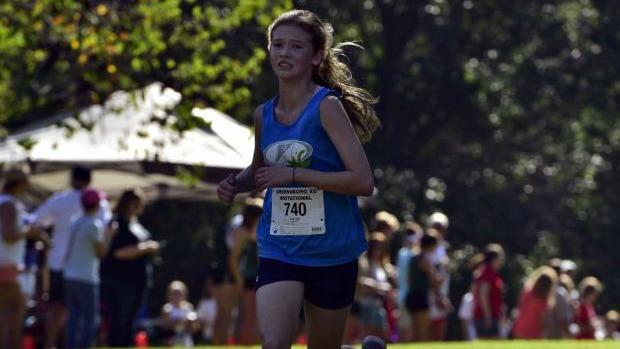 What more could a coach ask for then returning the top 17 girls to their cross country team?  Heritage essentially loses no one from their squad last season.  Heritage had a top 7 in 2016 composed of 5 freshman, one sophomore and one junior with their top 4 at the end of the season being all freshman.  Heritage had a very strong pack at the end of the season that had less than twenty seconds from their to girl to their fourth.  The team dynamic looks to have taken a slight twist over the outdoor track season, but in a good way as Melissa Bourne and Danielle Lugo look to have established themselves as a solid top 2 for the Huskies.

Melissa Bourne was Heritage's third girl last season, but she was their top girl in the 1600 in her freshman track season running 5:29.  Her XC PR was 20:26 as she steadily improved from her high school debut of 22:06 at the start of the season.  Bourne looks to have a big season ahead of her.  Danielle Lugo ended her XC season with a PR of 20:23.60 finishing as Heritage's #1 narrowly.  Lugo continued that success on the track ending her season running 5:33 at the regional meet.  She was also their top 800 meter running at 2:28.  Lugo looks to be a strong force for the Huskies for years to come.

Christina Bourne, I assume sister of Melissa, was just narrowly behind Lugo at the regional meet also clocking 20:23 returning as their #2.  Bourne seems to favor the longer distance races more than her teammates as she had a focus on the 3200 this fall.  Her best time was 12:25 and she also ran 5:54 in the one 1600 she raced in outdoors.  Bourne's regional XC race was a big PR as she steadily got faster throughout the season running 22:06 getting down to 20:23 at the end of the season.  Kristen Mills was the Huskies fourth girl in XC last year with a PR of 20:41. Mills only ran the 3200 during the outdoor season clocking a PR of 12:48 at Wake County's.  She and Christina Bourne will be used to racing longer distances, and should be pretty excited to get back on the XC course.

Erin Travis returns as their #5 with a PR of 20:53 that she ran early in the season last year.  She had an off day at the regional meet running 22:02 after originally being the teams top girl.  The rising junior did well on the track running PRs of 2:37 and 5:56.  But if the Huskies are going to continue bringing in strong freshman classes, she's going to have to work hard this summer if she's going to stay in the top 5.  Heritage does have a slight gap from their 5th girl to their 6th with a handful of girls at 22 minutes last season.  Madison Crum, Savannah Knowles and Dinah Halim all will need to try to make up the gap to be in contention to run in the Huskies top 5.  But this team has plenty of youth, though they'll lack experience on the championship stage.  This group still has plenty of time to grow the program together and if they're able to make it out of the 4A East this season it'll be huge for them experience wise over the next few seasons.  I'm very excited to watch how this team progresses over the next few seasons.