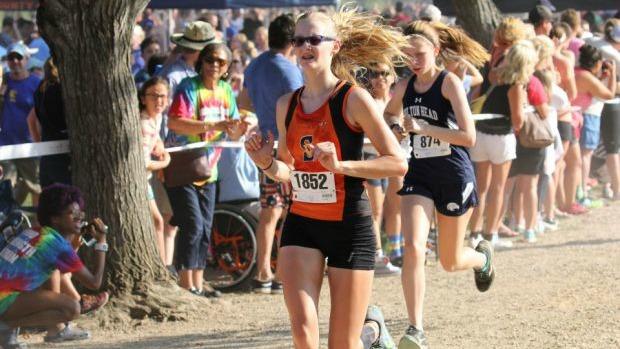 For a team that lose 3 of their top 5 from last year including star running Janay Hall, it might be a surprise to see them come in at #19 in our preseason rankings.  Despite ranking 35th in our returning team rankings, South View had a really strong outdoor track season.  If you score the 1600 and 3200 like XC South View returns the #9 1600 team and #16 3200 team.  They won't have tremendous depth, or the exact star frontrunner they had in Janay Hall, but I think South View is a very strong sleeper team out of the 4A East this season.

Faith Roy will return as the top girl from last XC season holding a PR of 19:37.  Looking at Roy's outdoor season I'd say she even underperformed in XC last year.  On the track she got down to 5:18  for 1600 indoors and 11:33 for the 3200 qualifying for the NCHSAA State Championships.  Last season was a big year for Roy after having a lackluster sophomore season due to injury.  Roy has been a three time varsity XC runner for South View and will certainly want to put together a dream season for herself and the Tigers.  She will have a lot of pressure on her to success as a low stick for South View, and I think she's certainly capable of doing so.

Madeline Carkeet had an injury plagued season last year in both XC and Outdoor Track.  As a freshman Carkeet ran 19:52.  Last year she had a gap in her season from August 27th until her conference meet on October 19th and still managed to run 20:32 and salvage her season.  Track was similar story for her as she only ran 5 races combined indoors and outdoors.  She still has raced when it matters at the end of the season as she raced at the regional meet on the track, so this makes me think that they were just being careful to not lose her long term.  If Carkeet has recovered and can put together a big training block, I think she could be a in for a breakthrough.  Rising junior Samantha Brooks is coming off her first ever cross country season where she started off running in the high 23s and got down to 21:08 towards the end of the season.  She was great on the track as well running 5:40 for the full Mile and 12:07 in the 3200 taking 8th in the East Regional.  Brooks will no doubt be better than 21:08 this season and should be a low 20 minute girl for South View this season if things go well.

Kodi Payne has been the biggest break through for the Tigers on the outdoor track.  It seemed like she had a big breakthrough coming after an early March 1600 time of 5:42, but it looks like she had to shut her season down early.  This doesn't concern me as she was able to race during the summer on the USATF circuit and ran 5:23 for the 1500, which isn't too far off where she was in the beginning of the track season.  Payne does look like she's struggled with some injury in XC as well with a pretty inconsistent season overall, with her best time being 21:44.  Last year was only her first season running and I think as time goes on she will only get faster.  Carlie Benefield was a transfer to South View last season from E.E. Smith, and as a sophomore that transition can be difficult.  After running 20:11 as a freshman Benefield was haunted at 21:22 in her first season with the Tigers.  However she did bounce back on the track running 5:47 for the full Mile, not too far off her 5:43 1600 PR, and 12:07 for the 3200 taking 7th at the East regional.  Benefield should now be comfortable in the South View system and will certainly be a factor for them this season if she can put things together.  Though South View might not look great in the returning rankings, I think this is a much better team and will be a force this fall.  Coach Jesse Autry has coached a lot of good teams, and I think he's got a special group with these girls.  The Jungle Run should tell if my somewhat bold prediction is correct!