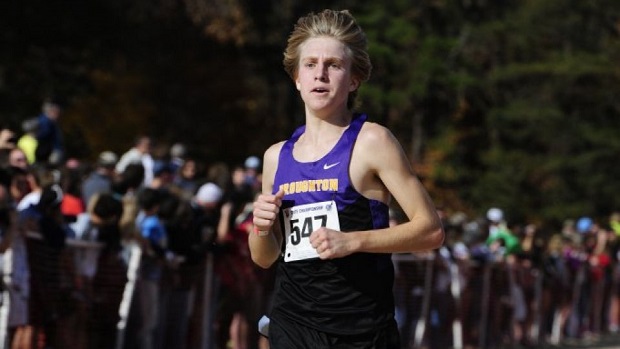 We're betting that this guy will be back in form, and his team will make its characteristic big leap forward during the summer.

We know what you're thinking right now: not very creative, is it, putting the three-time defending 4A champion (and the #1 ranked team at the end of the last two seasons) in the first slot?  Actually, this ranking is in defiance of the database, which projects Broughton as the 3rd-best returning team considering all classes.  However, the Caps have already proven that they can recover from losses due to graduation (such as the top three from 2013 that are now gone), and the signs from this spring point to just such an improvement.  For example, the team's returning #4 and #5 from last fall, who were separated from their #3 by over 40 seconds, ranked 2nd and 3rd among the team's returners in the 1600 (and that #5 guy broke 10 in the 3200, too).  Having 5 guys under under 4:35 and 4 at 10:05 or better bodes well, and the team is renowned for strong summers.  The Caps are the #1 returning team in the NXN Southeast Regional according to our database (although the addition of Philip Hall to South View challenges that).    There is one big catch here, though: we're betting that the top 5 stay healthy, because after them there is a significant drop-off in both cross country and track times.  Or, maybe Broughton will just manufacture a few more low-16's guys to help back up the front 5; after all, a year ago today Peter Millsaps had a PR of 16:26, and two years ago the Caps were projected as the 6th-best returning team for 2012.  Don't bet against this team, until somebody proves they can reach their level when it counts.