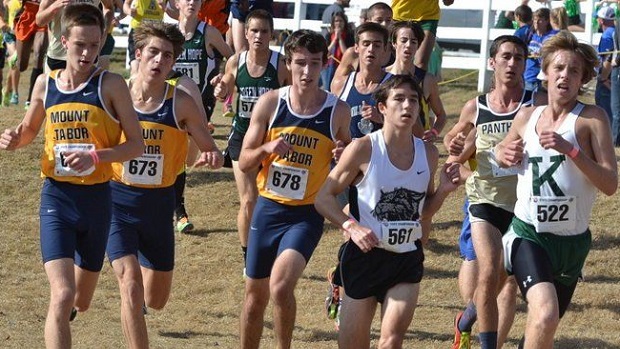 The biggest jumper on either the boys' or girls' list is Mount Tabor, and for a simple reason: we got tired of them greatly exceeding predictions.  There is simply no way the Spartans end up as the 14th-best team in the state, which is what the database predicts for them.  This team has strong returning 3200 results from the spring, owns the 2nd-best track record for improvement, and has an average All-Classes final ranking of 3.7 over the last 3 years (and 5.8 over the last 5).  In 2013, NCRunners predicted them 9th in the preseason, as Coach Cromwell made it a point to mention while on the podium collecting the team's 4A runner-up trophy.  That kind of intensity and passion rubs off on the team, which gives Mount Tabor arguably the best culture of hard work in North Carolina.  4 seniors graduated from the 2013 team, and the 2014 projected roster has 4 more; very few programs can sustain success with that kind of attrition.  Depth could be a big concern with only three sub-17 returners (and 2 under 10 minutes in the spring), but the Spartans have made it a habit to discover a new budding star nearly every fall season.  If they make the same summer leap that they have over each of the last 3 offseasons, count on these guys to be in the mix at the state meet once again.