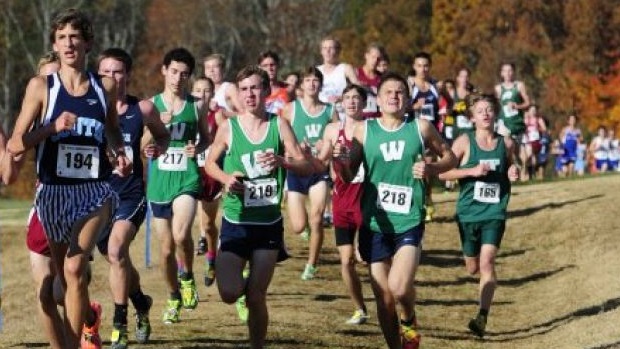 See all those white W's on green backgrounds?  Yeah, all those Warriors - that is, all 7 of them - are back to defend their 3A title.

The defending 3A state champions return all 7 runners, which means that in some ways they won it a year early.  Not only does Weddington have the whole team back, but they only have 2 seniors on this year's team, and so there is a real possibility that they could mount a 3-year championship run.  The Improvement Rating reflects the fact that it is difficult to continue to improve when the returning runners are already highly trained, and the Warriors have shown great year-to-year improvement over the last 3 years.  I have noticed that many of the best cross country teams in the state also seem to put the most runners into the 3200 during track season, and this team is a perfect example: they were the only school to have 5 returning runners average under 10 minutes during the spring season, with 3 actually breaking 9:50.  The Warriors have a real chance to put at least 5 guys under 16 minutes this fall, and it would not be too big of a stretch to see this team finish the season at #1 in the All-Classes Rankings.  Now the challenge is to repeat, and despite the fact that we've seen several programs hold the top spot in their state meet for multiple years recently, that is no small feat.