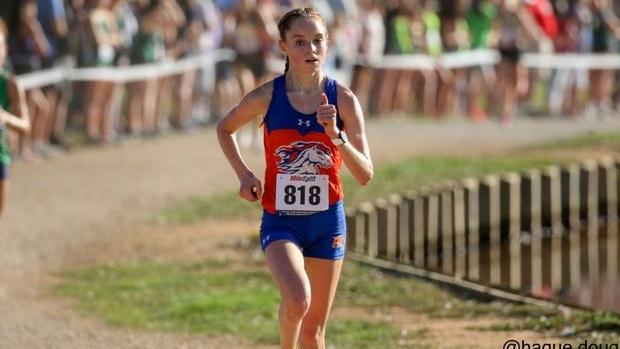 The North Carolina Hare and Hounds Invitational will be bringing in top-class talent in the 2022 competition. This meet is packed with a deep field of runners, with almost 30 teams attending. McAlpine Creek Park has been home for many Hare and Hounds races in previous years, and has also been home to previous East Bay races as well. With a course that has this much credibility, it would make sense for over 2000 runners to attend this meet.

The Championship 5,000m races will be the highlight for Saturday. The main battle in the Championship Boys race will be a three-way battle between four runners under the 16-minute barrier.

The top seed of this race is Jacob Barrow (Grimsley). Barrow, who has had a great start to his 2022 season, placed sixth at the Friday Night Lights Festival Championship clocking a new personal best of 15:42. He will definitely go into this race with the confidence of a state runner.

The two runners that will be chasing after Barrow will be RJ Gajan (Marvin Ridge), and Gabriel Schmid (Orange). Gajan had a great sixth place finish at Providence Cross Country Invitational, and had his personal best at Friday Night Lights Championship with an 11th place finish in 15:50.

Schmid also set his new personal best at Friday Night Lights, running 15:44, and finishing right behind Barrow. These three will definitely be making a great race to watch in this championship race.

Another sub 16 runner hoping to get himself in the mix is Cruz Hesling (Westchester Country Day), who ran 15:55 this season.

There will be other boys who will be making a great race, with nine runners under the 16:30 mark:

While the boys field is very talented, the girls field has a lot more depth that will be fun to watch. As far as talent, three of the top five ranked teams from North Carolina will send their A team to this meet. There are 32 girls who have amazing personal bests of under 20:00, while 12 of those girls are under the 19-minute barrier.

Hannah Rae Shaffer of Cardinal Gibbons is the number one seed going into this meet. She is ranked as the top sophomore girl in North Carolina, who finished fourth at the Friday Night Lights Festival with a season opener of 18:13. With a personal best of 17:19, she will definitely be looking to chase her record down on this fast course.

Shaffer's teammates will be toeing the line with her at the start as well, with Ina Lazarczyk hoping to go back into the 18:00's and Addy Mitchell gearing up toward her season opener.

Annie Miller (Metrolina Christian Academy) will also be adding herself into the Cardinal Gibbons pack, hoping to chase them down in the hunt for the sub-18 barrier.

Another girl that will likely be giving Shaffer good competition will be Ava Flaherty of South Walton, Florida. She has yet to make her season opener, but she is looking to get up there with the other four runners to try and give herself a new personal best. She is likely looking towards East Bay Regional later in November, so it is good for Flaherty to get an early season run on the course.

Along with the top five favorites for this race, there will also be a hunt in the rest of the chase pack who are under the 19-minute barrier, hoping to chase down fast times:

Cone, only a junior, is a two-time defending NCISAA 4A cross country state champion, who will look to bring that front-end experience with her in this loaded field.

The list can go on almost forever for many talented runners this Saturday morning race at McAlpine Creek Park. The day will start off bright and early with the Boys Championship race at 7:55am, and the Girls Championship right after at 8:15am. With the three-way battle of the boys and the group battle of the girls, there are some superstars to watch at Hare and Hounds.