Every year at the Great American XC Festival teams from across the country travel to North Carolina to take on some of the country's best. It's one thing to win a race, but it is another to win against a field of mostly out-of-state schools on your home turf. Since Great American XC moved from Alabama to WakeMed Soccer Park in 2009, no team from North Carolina has won the Race of Champions.

The Spartans of Mount Tabor and the Lady Warriors of Weddington made their mark on the country and each won the Race of Champions team title!

Mount Tabor got out to a rocket-fast start. At the 2000m split they had three in the top eight. Lucas Plitt and Andrew Burrell were at the front and took the field through the 2000m mark in 6:14. Davis Potter was right there with his teammates in 6:16. Will Soule and Douglas Gledhill were just a few seconds back of the leaders waiting for their moment. Soule made his move over the back half of the race and closed in on the leaders. On the hill Soule kicked passed James May (Marietta, GA) and Jimmy Mullarkey (Fern Creek, VA) and finished 4th in a 20 second personal best of 15:14. His mark is NC No. 2 this season!

Gledhill battled up the hill and was not far behind his teammate. He clocked a new personal best of 15:39 to take 16th! 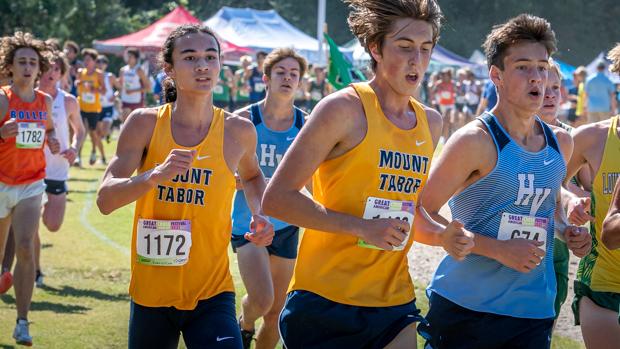 Potter had a fantastic back half to the race and closed hard to finish 28th overall in 15:53, just eight seconds off his personal best from the adidas XC Challenge.

Plitt and Burrell both fell off the lead group but their efforts were not in vein as they both had huge personal bests! The duo had identical personal bests of 16:35 from the adidas XC Challenge where they finished neck-and-neck.

Plitt just missed the 16:00 barrier at Great American, but still dropped over 30 seconds off his time as he ran 16:03! His time was good for 42nd overall. Burrell was just behind his teammate and he finished in 48th place in 16:13.

The team battle was tight.

Severna Park, MD had their top three runners in the top 20 overall. Plitt's and Burrell's huge performances ended up being the difference maker for the Spartans. Plitt and Burrell were both in before Severna Park's No. 4.

With 100 points, the Spartans of Mount Tabor took the Boys Race of Champions team title over Severna Park's 105 point performance.

Mount Tabor finished with a :59 1-5 split and a 15:49 average! This was a huge day all-around for the Spartans. Four out of their top five set personal bests in this race. The Spartans are starting to look like a top team in the country, and I do not think they are at their peak yet.

The Lady Warriors of Weddington have really found their stride since their victory adidas XC Challenge. Junior Elizabeth Ritter and senior Emma Jones have been the heart and soul of this squad and they brought their A-games to Great American. Ritter lead their pack through the 2000m around 20th place overall. The team scores were already tight as Weddington held a 122-128-138 advantage over 2nd and 3rd place.

Ritter chopped seven seconds off her personal best and clocked 18:17 to take 17th place, finishing as Weddington's No. 1.

The Cambridge Christian, FL trio made things very interesting up front, as their top three runners were all in the top 20.

Weddington lives and dies by the pack, and yet again it did not disappoint.

Hanson has been a great addition to this squad after not competing her freshman year. Her first race of the season was a 19:24 at the Providence Invitational. She has been under 19:00 in every race since then, and capped it off with a 18:40 personal best at Great American.

Just seconds behind them was Audrey Wright, Weddington's No. 4.

Wright had by-far her best performance of the season, running a new personal best 18:48 to take 34th.