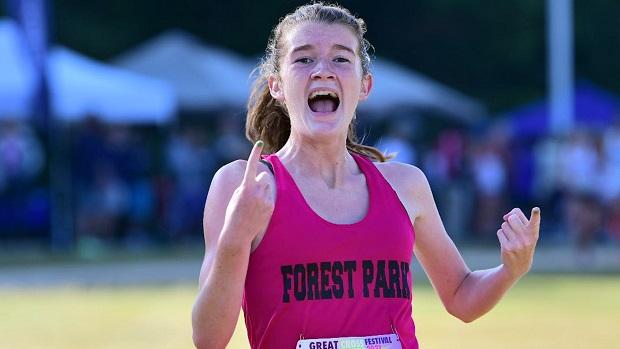 It was perfect conditions on Saturday morning in Cary, North Carolina for the running of the 2021 Great American XC Festival.

WakeMed Soccer Park played host to over 1,700 athletes traveling in from 15 states and whom were eager to chase new personal best times. With loaded fields in the Race of Champions on both sides, this meet had the makings to be one of the fastest we see in the southeast this season.

Sam Rich (Catawba Ridge, SC) was the headliner in the Boys Race of Champions after his US No. 1 time of 14:38 a few weeks ago at The Southern Showcase.

As the field made their way up the hill for the first time right after the opening mile, Rich stayed patient in the lead pack.

The field crossed the 3,200m mark in 9:44 as Rich started to pull away from the group. As the athletes came up the hill for the final time, Rich had finally pulled away from Ryan Motondo (Walter Williams, NC) and it was him versus the clock. He came storming down the home straight away and took the victory in 14:59. He became the 23rd runner in Great American History to break 15:00 at the event.

Tyler Canaday (Severna Park, MD) had a huge break-out performance. The senior entered the day with a 3-mile personal best of 15:37. He shattered that Saturday as Canaday clocked 15:10 for 5000m. That time is good for MD No. 6 all-time!

Severna Park was the first team to have its No. 2 runner cross the line, as senior James Glebocki finished 14th. Mount Tabor's No. 2, Douglas Gledhill, was right on his tail, however, and finished 16th. Severna Park took the early advantage as its third runner, Eddie Sullivan, secured 18th place.

Mount Tabor had a 20 second split between their 3-5 runners which proved too much for Severna Park. Davis Potter finished 28th in 15:53, with teammates Lucas Pitt and Andrew Burrell finishing 42nd and 48th respectively.

In the end, the pack of Mount Tabor boys made the difference as the Spartans took down Severna Park, 100-105.

Hardin Valley Academy (TN) was third with 166 points, Cumberland (RI) was fourth with 204 points and Bolles (FL) was fifth with 214 points.

The girls Race of Champions field refused to be outshined by the boys and produced five new U.S. top 25 performances this season.

Ciara O'Shea, of Madison Central (KY) went straight to the lead and brought the whole field with her. It was O'Shea and The Webb School's (TN) Abby Faith Cheeseman leading the pack through 2,000m in 6:45. Eighteen girls were under 7:00 at the 2,000m split.

As they made their way up the hill for the final time, O'Shea and Fahys started to pull away. O'Shea turned on the jets over the final 200m and crossed the line victorious in 17:08, a US No. 14 time this season. Fahys held on for second in 17:12, US No. 21 this season.

Northwood's (NC) Caroline Murrell finished 10th in a new NC No. 1 time of 17:52. Cardinal Gibbons freshman Hannah Rae Shaffer was 12th in 17:57 and moved up to No. 8 on the all-time North Carolina freshman list.

Weddington came back strong and put its top four in front of the next Cambridge Christian runner. Elizabeth Ritter was able to disrupt the Cambridge trio and finished 17th. Emma Jones and Grace Hanson came in 26th and 27th for Weddington respectively.

The difference maker was Cambridge Christian's No. 5 runner, who scoring 76 points, compared to Weddington's 49 points from its No. 5.

Weddington took the win over Christian Cambridge, 120-123. The battle for third was tight but it was Howard who took third with 149 points over Morgantown's 152 points, and Cuthbertson's 153 points.