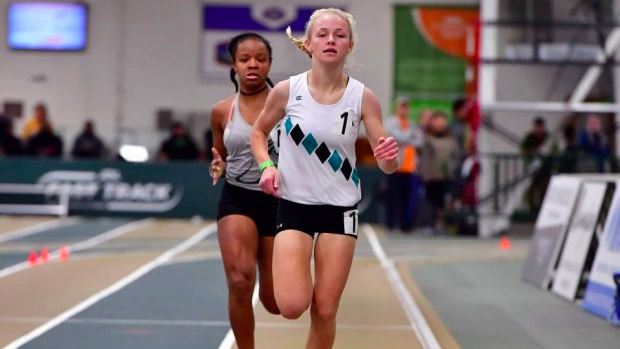 Faircloth also had a very solid 2017 cross country season running 18:09 to place 3rd overall.  But since her stellar indoor season Faircloth might have looked to "disappear" from North Carolina distance running.

Off the track Faircloth is a star soccer player.  She's already committed to play collegiately for Wake Forest.  With soccer pretty much conflicting with every track season except for indoor it'll caused her to miss both outdoors and cross country.

After 9 months away from running and playing soccer, Faircloth had her first major meet back last weekend.  She ran a leg of Reagan's winning 4x800m and also ran individually in the 1000m.  Cora Cooke (Myers Park) ran a very fast 3:04.79 in the section prior to Faircloth.  She knew she'd have to take out the pace hard if she were to match that.

Faircloth and Victoria Swepson (Research Triangle) were nearly inseparable the entire race with Faircloth leading the majority of it.  Swepson tried to make a move on the final straightaway, but Faircloth was able to hang on in an impressive 3:00.99 to Swepson's 3:01.54. The times are good for NC#1 and NC#2 as well as US#5 and US#7 respectively.

Faircloth talks about her surprise at how fast she was, and how she and Reagan Coach Eric Fritz focus on lower mileage to balance both soccer and track.  Despite having 9 months off of running track, Faircloth shows that playing soccer throughout the entire year certainly keeps her in good shape for distance running.