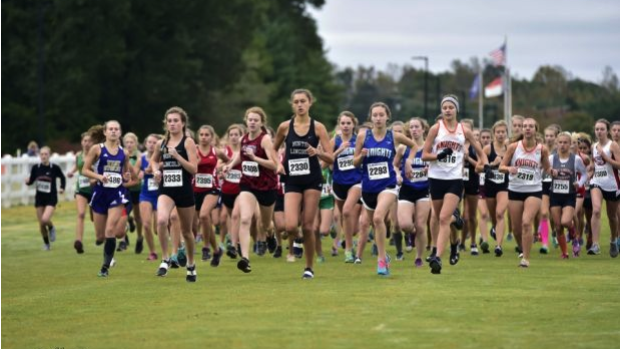 The boys individual battle for 2A is certainly going to be a toss up and arguable the best race of the day.  Erick Ramirez-Ramos (Surry Central) enters with the fastest time on the year of 15:47.  However, he took 4th at his regional last weekend behind Jason Thomson (North Lincoln), Ben Armentrout (Atkins) and Brian Risse (North Lincoln).  All four of these boys are going to be in the hunt for the individual title as well as the East Champion Zach Hughes.  Hughes clocked a 15:47 earlier in the year and ran 15:57 to win his region last weekend.

Thomson is coming off a big win the the Midwest regional over the majority of the 2A competition.  After a strong sophomore track season he's emerged in cross country and has a seasons best of 15:55.  Just behind him was Armentrout who has run 16:00 this year.  Last year Armentrout was 8th at the regional level and 5th at the State Championship. Ramirez-Ramos has proven to be a star taking down a big field at the Greensboro Invitational.  I expect him to bounce back after his 4th place finish at the regional level, and it wouldn't surprise me if he focused on qualifying rather than winning.

Last year North Lincoln edged First Flight with a score of 58 to 69.  We haven't seen these two schools race each other at full strength this year, but expect this to be another tight rematch.  The two programs are separated by just 2 points in our virtual meet.

Coming into the meet both teams have three boys that could be all-state finishers.  First Flight has Hughes, Tyler Sylvia and Joseph Davidson.  North Lincoln has Thomson, Brian Risse and Johnny Grant.  Coming into the meet First Flight looks to be slightly better through 4, but North Lincoln has the depth through 7 having all 7 boys ahead of First Flight's 5th and 6th Max Bowlin and Aidan May.  These boys have run 17:10 and 17:11 this fall and will need a big day at the state meet in what will be a very tight team battle.  First Flight would be the first 2A team from the East in NCHSAA history to claim the 2A team title.

Croatan and NCSSM will be in the mix as well.  Croatan is led by senior Jamie Rodriguez, but has a very young top 5 of one senior, one sophomore and three freshman.  They're going to be a team in the mix for the next four seasons.

The individual battle on the girls side looks to be a three girl race between Hannah Preisser (Carrboro), Alyssa Galvin (North Lincoln) and Angie Allen (North Lincoln).  Preisser emerged as a star immediately as her freshman year got underway.  Last week she posted a new season best of 18:40 at the Mideast Regional.  Galvin and Allen have been back and forth this season as the top girl on their team, and hold PRs of 19:04 and 19:07 respectively.  They were the top two returners heading into the season and proved to be studs throughout the year.

Emmaline Daggett (NCSSM), Reese Hogan (Croatan) and Makenna DeLuca (Croatan) will compete for a top finish tomorrow with seasons best of 19:12, 19:19 and 19:20 respectively.  Also former 1A State Champion Michaela Gammon (East Lincoln) comes into the meet ranked 8th in 2A.  Karina Coulter (Fred T. Foard) comes in with a PR of 19:40 and is fresh off a 2A West Regional win.

Carrboro girls are coming off a strong regional performance.  They looked to come into the season with a strong gap of girls from 1-5, but the addition of Preisser as a frontrunner helps them tremendously.  They have a gap of just 27 seconds amongst their 2nd through 6th girls.  They've going to be tough to beat tomorrow, but five other schools will be eyeing the team title as well.

North Lincoln, Croatan, NCSSM and Lake Norman Charter all come in ranked very close together in the virtual meet.  Science & Math are arguable better than Carrboro through 3 girls, but don't have the depth coming in to match them at 4 & 5.  For most of these teams it's going to come down to which school has their 5th in first.  They've all got girls that'll be up front in the race and it'll come down to the final straight on how many spots the girls can move up as the race comes to a close.