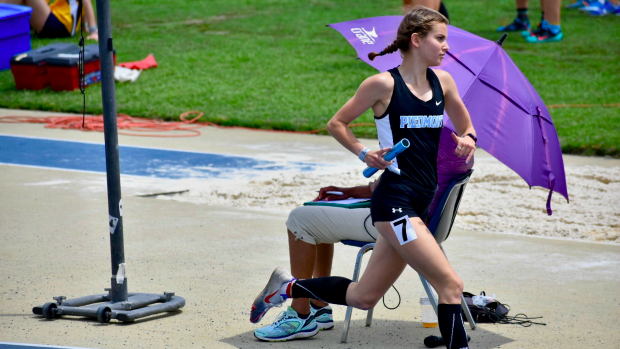 Find out how to submit your own Salute To Senior article

I actually have two because I cant choose. My most memorable track moment is when our 4x8 won county for the first time. We had our doubts but deep down we knew we could win. We wanted it more than anyone else and we did it. Just like we knew we would, no matter how absurd it was.

My next most memorable track moment was in my sophomore year: a.k.a. my roughest year. I had an iron deficiency and never thought I would run again. It was outdoor track regionals and although I was running well again I had so many doubts. I got so nervous I actually threw up for the first time on the infield. I wasn't seeded to be in this race at all with my pr that season still in the 12's. I got on the line and knew I had to take risks if I wanted to make it. So I trusted my coach and I went for it. I finished in fourth running an 11:56 which was my first time breaking 12. Much to my surprise, I made it to states. I have never seen my coach and my dad so happy in their lives, before that moment.

I would say my biggest competition would be Sarah Latour. The majority of my meets she was at and we formed a close bond. She always pushed me to be my best she really is one hell of a racer. All those crazy kicks she does that seems impossible, they're possible trust me I was there to see them.

What was your greatest accomplishment?

My greatest accomplishment is getting the opportunity from coach Weaver to run as a Pirate. I had a crazy dream as a kid to run in college, however, the older I got the less crazy it seemed. Soon enough after ten years is became a reality. It is my biggest accomplishment and my most proud moment.

I would have definitely taken care of my iron deficiency sooner so it wouldn't have taken me out of my sophomore cross country season.

I tore my quad my sophomore year and I didn't think I would run again. Of course, there were hard races that really put me down, when I didn't perform my best it was always a shot to the heart.

What advice would you give to younger athletes?

Theres going to be good and bad races, let the bad ones fuel you, let the good ones push you to be better. Don't ever settle. During those hard times look to your team and enjoy the little things with them like meals, bus rides, really anything. Your team will be your #1 fan through the whole thing, when your down they will pick you up. Let them.

My coach has pushed me to be my very best in the class room and on the track. He has supported my dreams no matter how crazy they are and he has never once doubted me or my teammates. He makes fulfilling our goals seem easier like a good coach should.

Thank you to everyone who believed in me and doubted me all of you made me a better runner mentally.

But more importantly, to my dad for being my hero and showing me I could do absolutely anything no matter how hard it is. Thank you for being behind me through everything.

To my coach because without him I wouldn't be half the runner I am.

To my trainers: Felicia and Kaitlyn who fixed me every time I broke (which was a lot).

To Coach Weaver and Coach Kraft for believing that I have what it takes and giving me the opportunity to help make their team better.

Last but certainly not least to my team. These people have let me lead them for the past four years. They work so hard and show me why I am running for four years. We have been here for each other in all the highs and the lows. They are my greatest inspirations and my greatest laughing source when I'm down. I am going to miss them so much. Thank you guys for being and amazing team you're in my heart forever.

Running in high school was the best decision I could've made. It brought me my best friends and gave me a reason not to go out and be an idiot at high school parties. I knew if anything happened I wouldn't be running in college so I stayed away. So high school athletes pursuing a sport in college, remember one party isn't worth four years. One small thing that you think won't hurt you it might.  I promise not going to parties won't change whether or not your friends like you or how respected you are. Be smart, you can have fun without those things trust me. Oh and one last thing #gopirates