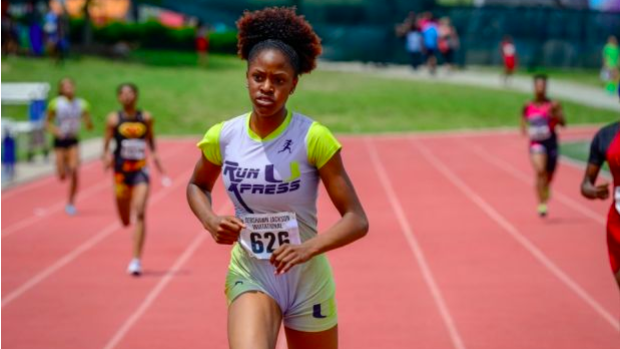 Temperatures climbed up into the 90s in Greensboro, NC on Sunday, the last day of the USATF Region 16 Junior Olympic Championships. Yet even factoring in the heat, Kayla Davis, member of Run U Xpress, wasn't completely satisfied with her performance in the 15-16 400.

But she came pretty close. Davis ran a sensational 53.01 to grab a win in the 400 and qualify for the USATF Junior Olympic National Championships from July 23-29 in Greensboro. She was even just 0.9 seconds away from breaking the 15-16 400 youth national record. And to top it off, Davis ran an impressive 23.80 to win an additional regional championship in the 200 just ahead of Jonah Ross of Track Xplosion.

Most would call that a successful race day, even though Davis didn't cross the finish line in 52 seconds like she had hoped to.

And Davis was just one of many athletes who put on impressive displays over the weekend at the USATF Region 16 meet.

One of the most exhilarating races of the meet came in the final of the 17-18 women's 100 hurdles. Neck and neck with NBON All-American Nicole Barnes of High Point Panthers from the gun, Sierra Fletcher of Island Gliders came over the final hurdle in the lead and just out-leaned Barnes at the line, winning in 13.94

Fletcher also won the 17-18 400 hurdles in 1:01.19, beating Ariana Rivera of Charlotte Heat. Rivera had previously finished as the runner-up to Fletcher in the 300 hurdles at the NCHSAA 4A State Championships back in May.

Although Fletcher put on a strong showing, she still hasn't reached her ultimate goals. Her goal for the USATF Junior Olympic National Championships? "13 low [for the 100 hurdles], under one minute for the 400 hurdles," said Fletcher.

Many other athletes ran stellar races in the hurdle events. Alexander Nunley of Run U Xpress was a double champion just as Fletcher was, winning the boys 15-16 110 hurdles and 400 hurdles.

Nunley's blocks even slipped as he started the 110 hurdles, but still built and maintained a large gap on the rest of the field.

"I was able to recover, still make it to the first hurdle first, and then pull away after that," said Nunley.

And Nunley wasn't the only hurdle champion to face miscues. Joshua Brockman of Charlotte Flights won the men's 17-18 110 hurdles, with his shoe starting to slip from his foot during the race.

"There's a lot of work to do, but I'm happy with the win," said Brockman.

Other notable competitors on the men's side of the competition included Randolph Ross Jr of Track Xplosion, winner of the 17-18 400 and runner-up in the high jump. A battle also brewed between Bull City Express teammates Isai'as Robinson and Cameron Council in the 17-18 100; Robinson won the battle over Council by just one hundredth of a second in 10.58.

And an athlete who just recently made North Carolina history competed at the region meet. Timara Chapman of Carolina Eagles, now the state record holder in the heptathlon, elected not to compete in her record-holding event; she instead won both the 800 and the high jump in the 17-18 division, as well as contributed to the winning Carolina Eagles 17-18 4x400 relay team.

With Chapman not in the mix, Durham Striders' Jada Green won the 17-18 heptathlon with 4,251 points.

Chapman is coming off of a runner-up finish in the heptathlon at New Balance Nationals, where she set her state record of 5,014 points.

The NC State signee didn't even know that she broke the North Carolina state record until she read about it on Twitter. But she used the USATF Region 16 meet as a way to almost relax after a long weekend at New Balance Nationals.

In the field events, the recently crowned North Carolina Girls Gatorade Track and Field Player of the Year Veronica Fraley dominated yet again in the 17-18 women's shot put and discus. She won the shot put by nearly 10 feet with a throw of 47-06.25, and grabbed a title in the discus with a distance of 148-10.

And in the jumps, Omar McBride of Carolina Eagles excelled in the 17-18 men's high jump, setting a new personal best of 7-00.25. That mark moved him up into a tie for the US #8 spot.

Now with nearly a month to go to nationals, all of these athletes, and many more will have a chance to prove themselves on a bigger stage.