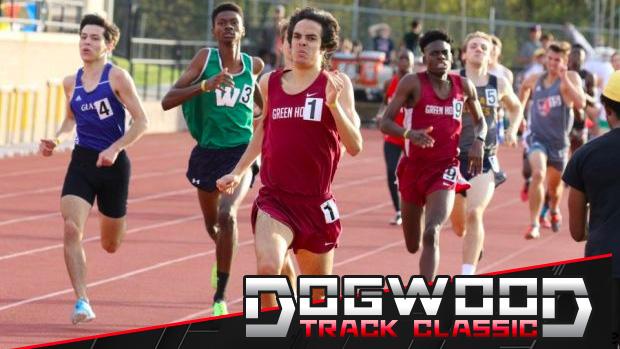 The Dogwood Track Classic has made a return to greatness these past couple years. Long before many of these kids were in high school though this meet was still great as well. Check out the top 10 cutoffs for every event this weekend on the following two pages.

We'll see a few teams and athletes from NC looking to hit a last chance tune up prior to NCHSAA Regional and State Championship meets up at Dogwood Track Classic this weekend.

Tonight we'll see Ryan Brown (Broughton) and Jacob Wells (Broughton) and compete in the 2000m Steeplechase.  Brown clocked a solid 6:13.95 at the VertKlasse Meeting in early April, and will be contending for the win tonight.  Wells took second in that race at 6:25.  They'll both contend for a top spot tonight at approximately 7:40.

Not listed in the entries, but confirmed by his coach, Ian Delgado (Green Hope) will be headlining the 800 & 1600m fields.  He'll face off against Jake Renfree (Knoxville Catholic), Brent Bailey (Ocean Lakes) Andrew Delvecchio (Lake Braddock) and Colton Bogucki (Loudoun Valley) in the 1600 in a race that should be fighting to dip under 4:10.  He'll double back in the 800 a little under 3 hours later to face off in a strong 800 field as he will look to break his 1:51 PR from the indoor season.  Delgado's events are both on Saturday and are scheduled to go off at 2:15 and 5:00PM.

David Melville (Northern Guilford) and Ryan Brown (Broughton) are also scheduled to compete in the 1600 and should both be on the fringe of being in Delgado's section as both look to get under 4:20 for the first time.

John Tatter (R.J. Reynolds) will square off against fellow Foot Locker finalist Jake Renfree (Knoxville Catholic), Sam Affolder (Loudoun Valley) and Benjamin Nibbelink (Tuscarora) who are all seeded on the verge of being under 9:00.  This will likely be Tatter's final chance to dip under 9:00 for the 3200 unless he trains through to New Balance Outdoor Nationals.  Tatter clocked 9:01 at the Arcadia Invitational earlier this year as well as at the Dash for Doobie at the end of the XC season.

We also saw freshman Jack Dingman (Northern Guilford) run a 9:40 solo at the NCRunners Elite Invitational last weekend.  He'll be racing in the heats prior to Tatter and should have a good sho a running significantly faster than than against strong competition.  The 3200s are scheduled to start at 6:35.

Amaya English (Northern Guilford) will also compete in the 100m Hurdles and 300m Hurdles which will run at 12:45 and 4:05 respectively tomorrow.  English is the 4th overall seed in both events with seasons best of 14.91 and 45.46 in the two events.