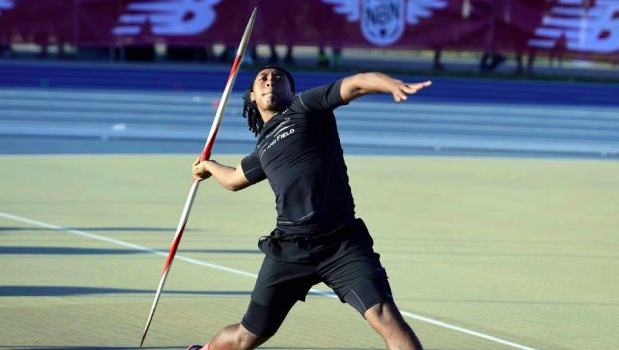 Jeff Gorski, of Project Javelin Gold in Chapel Hill, credits Roman Mitchell, one of his star athletes, with saving his life. He recounts, during a February 2017 training session  "I had a seizure, from a previously unknown brain tumor. Roman helped me to the ground, turned me on my side so I would not choke on my tongue, and called 911.... If he was not there, I have no idea what would have happened. As far as I'm concerned, I pretty much owe my life to him." Mitchell's mom, Natalie, elaborates, "Roman was cool as a cucumber. He kept himself composed and his maturity" helped guide the emergency responders to Gorski's rural training location.

Mitchell's quick thinking and mental strength also help him on the javelin runway. His skills and early successes caught his coach's eye a few years ago. Gorski met Mitchell when he attended the coach's clinic during the athlete's junior javelin days. Gorski remembers, "I asked if anyone [at the clinic] knew the guy who won [the junior javelin event], a hand went up in the crowd.... Roman's hand!  We've been training together since that meeting the summer after his freshman year."  Unfortunately Javelin is not a NCHSAA sanctioned event, so Mitchell competes and trains separately from his high school.

Mitchell's family, has a long history with the javelin. He recalls, "I started throwing javelin when I was 6 years old with the turbo jav." His older brother competed collegiately for Campbell and Winthrop in throwing events and his mom competed scholastically in throws and jumps.  He also believes his Native American heritage compels him "to pursue [the javelin] and try to be the best." Mitchell comes from the Waccamaw Siouan people.

In June 2017, he achieved All-American status with his 199-10 heave at New Balance Nationals Outdoors. He especially likes the NBNO Meet. He confides it's his favorite because, "all of my friends and fellow opponents come and we all put on a great show."

Following NBNO he captured the main event with a PR throw of 207-6 at the American JavFest in Pennsylvania last summer.

Mitchell's quest to be the best javelin thrower he can be lead him to give up participating in the shot put, discus, and football: the sport he's competed in since the Mighty Might level.

When he's gearing up for competition Mitchell always dons a bandana and shares, "Before I throw I clear my mind, I think about something completely different than the sport." He adds, "I am not afraid to pump up the crowd!" His dad, Joseph, encourages him to "bring his personality to his competitions. I want people to feel the Great Spirit behind him and in turn this will bring popularity to the event. I want other young men to see the life opportunities the javelin can bring them!"

Gorski says of Mitchell, "His technique is really quite good, as is his feel of the event.  In something as highly technical as javelin, those qualities are more important than raw power or size. And mentally, he's as tough as a cheap steak.... Javelin is very tough on you, mentally and physically, and it takes a special type of person to excel at it and Roman has displayed those qualities with surprising ease."

He continues, "As with most elite athletes, he has qualities all people have, but has the ability to tap into aspects of himself to his advantage when he needs.  He's not the biggest guy, or the strongest or the fastest, but he's really good at pretty much everything.  That balance, that ability to be good at everything and have no really weak areas, is pretty unique at this age.  Sure, some of it comes from his training and ideas from me, but he's a real student of the event and does a huge volume of work on his own- studying videos, finding new ways to look at training.  And his technique is pretty well developed." Mitchell agrees and lists speed and his mental strength as assets.

Mitchell's confidence in his technique is part of what makes him a great teammate. He says he knows "when to cut it off and when to turn it on" during training. Gorski elaborates, "He's a really fine young man and he is a real asset to our development program. He's one of the seniors in our program and I look forward to seeing him progress as he joins the team at UNC-CH."

Javelin competitions have taken Mitchell all over the country and internationally. During high school he enjoyed a summer camp in Finland. He's looking forward to competing as a Tarheel for UNC and has his sights set on the Olympics.